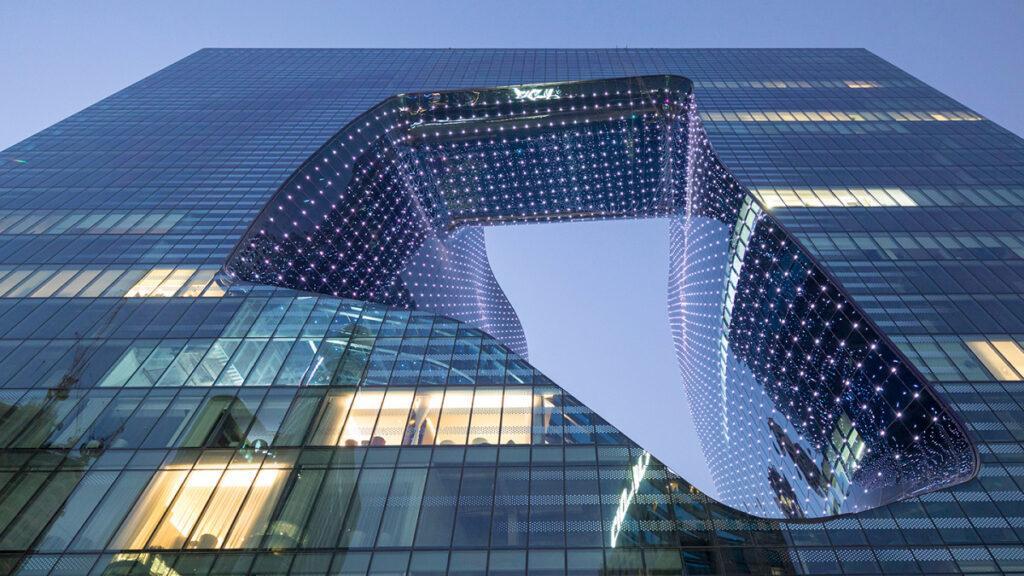 The recently opened boutique hotel “ME by Meliá” in Dubai is the only hotel building designed by award-winning architect Zaha Hadid both inside and out. The typical trademarks: breathtaking curves, sharp angles, bold materials and expressive colours.

From the outside an absolute masterpiece of architectural art. And inside – that is “where the magic happens”. The bloggers on the website of the Portuguese design company Boca Do Lobo are going into raptures. The new hotel of the Spanish hotel group Meliá Hotels International in Dubai embodies luxury class design. The hymns of praise, especially in Arabic-speaking countries, outdo each other.

No wonder. Zaha Hadid, at the age of 65, shortly before her unexpected death in 2016, completely redesigned the boutique hotel ME by Meliá from A to Z. The luxury hotel was not her last choice, but the Leeza SOHO Building in Beijing.

However, the ME was the first and last hotel to be given the unmistakable stamp of the Pritzker Prize-winning architect, both inside and out, with her futuristic style.

After her death, Zaha Hadid Architects was very keen to finalize everything in her spirit in order to preserve her legacy. Recently, the boutique hotel with its 93 rooms was officially opened.

The building with its unique shape meant that no two bathrooms are alike. The Iraqi-British star architect either designed or selected everything herself, especially the objects and furniture of the 19 luxury suites, including the “Passion Suite”, the “Personality Suite”, the “Vibe Room” and the ultra-luxurious “ME Suite”.

With a total area of around 23,000 square metres, the extravagant new hotel building also houses 98 designer apartments as “Serviced Apartments”, distributed over 19 floors. Commercial and entertainment areas complete the concept.

The “Opus”, designed by visionary Hadid, consists of two towers that would together form a cube – if it weren’t for this hollow space in the heart of the building. Its centre thus offers spectacular views through and out. The glass parts all had to be individually made.

The free-flowing shape of the eight-storey cavity of the opus contrasts with the precise orthogonal geometry of the surrounding cube. After all, one of Hadid’s trademarks was the interplay of corners and curves.

From this gap you can admire the four-storey atrium on the ground floor, which connects the two towers below. Above the eight-storey “void” is the asymmetrical “skybridge”, 71 metres high, 38 metres wide and connecting four storeys.

The developer of this impressive opus is the local Omniyat real estate group.

Hadid has demonstrated a sculptural sensitivity that reinvents the balance between solidity and emptiness, opacity and transparency, interior and exterior space.

The ME Dubai is located in the cultural epicentre of the city, in the heart of the Burj Khalifa district. The opus is only a few minutes away from the highest building in the world, the Burj Khalifa, which bears the same name.

It has three luxury restaurants – including the Central, designed by Paul Bishop. The design studio Bishop Design LLC, which was founded in 2004, is constantly carrying out projects, especially in the entire MENA region (Middle East & North Africa).

In addition, there are another 15 dining options at Opus, such as the Japanese Robatayaki restaurant Roka, which is already represented several times in London. Culinary delights await you there, with high-end cuisine in a modern ambience around the Robata grill in the centre.

The building that never sleeps

During the day the Opus reflects the glaring sun, in the evening the LED lighting emphasizes the flowing, lively character of the object. The inhabitants call it “the building that never sleeps”.

However, the first ME by Meliá in the Middle East is committed not only to exuding contemporary luxury from every millimeter, but also to being operated and managed in a noticeably sustainable manner. One of the corresponding initiatives is a partnership with the company “No More Bottles” based in the United Arab Emirates (UAE): a drinking water filter system throughout the hotel is to help avoid plastic containers. Glass bottles with pure, filtered water are found in the rooms.