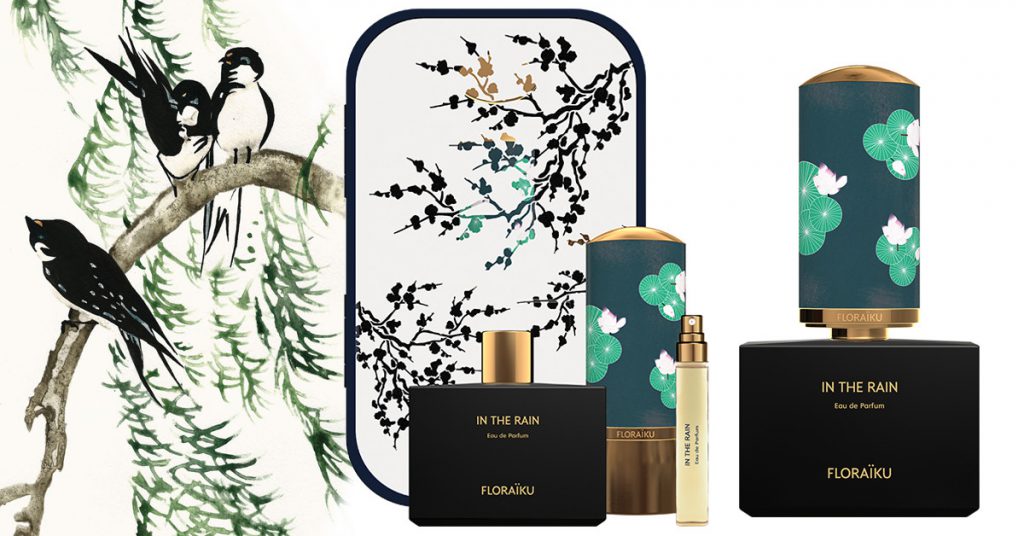 I received some incense sticks as a souvenir from our neighbour following a trip to Asia. I was eight years old at the time and they seemed infinitely precious to me. They smelt different to anything I’d encountered up until that point, and soon the whole linen cupboard where they were put smelt the same, enchanting and exotic …

Several years after receiving the incense sticks, the Shōgun TV series was shown on German TV, and alongside Richard Chamberlain’s character of a shipwrecked sailor from the 17th century, I discovered the reserved island nation of Japan with its different way of living, thinking and feeling. Despite the incredibly awful dubbing and the poor image quality, I was fascinated by the typically Japanese mash-ups of sparseness and opulence, poetry and violence, and by the creative force seen in even the smallest details.

During my design studies, I finally found myself a book of traditional Japanese patterns: cherry blossom, waves and cranes. I particularly liked the miniature maple leaves that looked as though they had been scattered totally at random, but which at the same time appeared in absolute harmony with each other. This book became my source of inspiration for countless projects.

I travelled to Japan for the first time in 2013.

The streets of Kyoto, with their age-old shops selling paper, vintage fabrics and tea, felt so familiar it was as if I had come home, for the Japanese were as crazy in their love of detail as I was. It was only later that I realised how often a Westerner like myself can feel like an uncivilised barbarian in this highly sophisticated culture, simply because we don’t know the rules. And rules are important in Japan!

I owe my love of Japan to
a pack of incense sticks and
Richard Chamberlain.

In the Saihō-ji temple, I rediscovered my maple leaf. The temple garden emulated a dream landscape composed of trees and over 100 different types of moss. And at the edge of the pond, under a bare bush, there it was waiting for me: a little red maple leaf on a green cushion of moss. A symbol of the connection between the greatest refinement and the love of the seemingly incidental, never arising from chance but rather the precise observation of chance and its consequences – that’s Japan for me!

The land of the rising sun also eschews excess in its approach to fragrances.

So in the same way a Japanese person typically makes a point of wearing a respiratory mask when they have a cold so as to avoid passing it on to other people, so would they find it unthinkable to poison the air with strong perfume in close quarters with other people.

Yes, there is the tradition of burning incense sticks and the international presence of Shiseido as a mainstream perfume brand. But the market has always been particular, demanding refined yet subtle fragrances. Sophistication can even be found in the supermarket: while global shampoo brands sell their products with the same scents almost everywhere in the world, specific fragrances are developed for Japan. It is only in the last few years that Japanese consumers have discovered tentatively more intense and daring fragrances.

Japanese aesthetics have inspired a whole raft of perfumes in recent years.

Ramon Monégal, Dior and Floris have all celebrated the Japanese cherry blossom sakura, and Japanese-born Miya Shinma has opened her own perfume house in Paris.

But no other brand celebrates the theme like Floraïku: the bottles are reminiscent of a Japanese Shinto priest’s headdress and are presented in what resembles a bento box, perfume names like Between Two Trees or The Moon And I sound as if they’ve been taken from a Haiku poem, and my beloved traditional patterns can be found on the beautifully decorated bottle lids. These
lids can then be turned into a travel bottle in the blink of an eye thanks to the vial included, another very Japanese feature: transforming an object into something else in just a few movements. Think rice paper screens that can be used to divide a room according to your needs.

My absolute favourite in this range is In The Rain, which has captured my heart with its clear bergamot, cedar and woody musk notes.

It reminds me of the gentle spring rainfall that comes down on the pond in the Saihō-ji moss garden – and a bit of Richard Chamberlain.

is an independent journalist and creative consultant from Berlin, and has had a particular passion for perfumes since he was a child. With his successful 2013 launch of SCENTURY.com – the very first online magazine for perfume storytelling – Helder has become a recognised authority in the global world of fragrance.

He has been on the jury for events such as The Arts & Olfaction Awards in Los Angeles and the Prix International du Parfumeur Créateur in Paris. As a writer, he combines his passion topic of fragrances with a range of fields such as contemporary art, popula culture, literature, film and geopolitics.