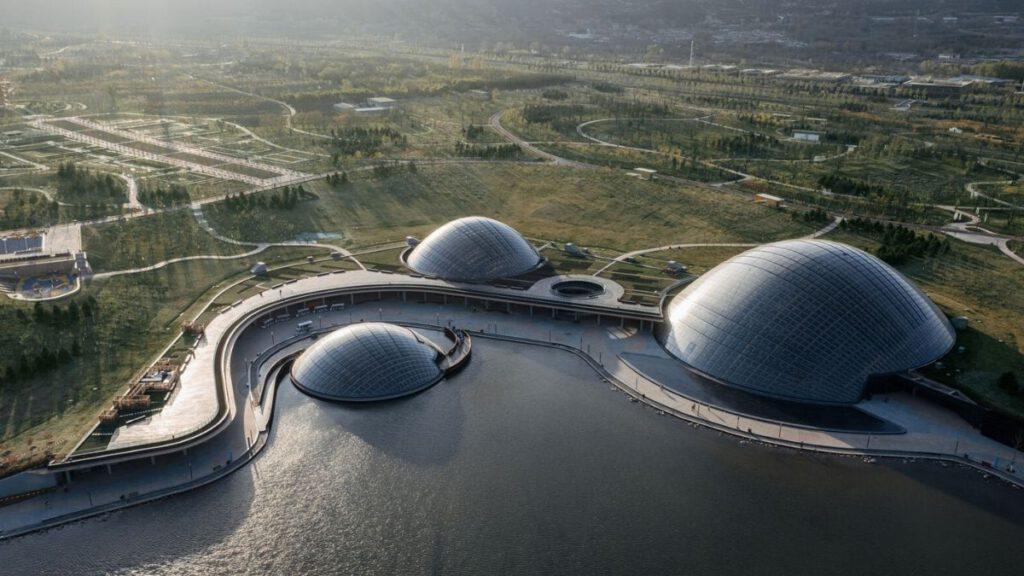 Delugan Meissl Associated Architects have designed the Botanical Garden for the city of Taiyuan in China. Its three timber-framed domes have lattice shells that could even be the biggest in the world.

The Chinese city of Taiyuan has a strange claim to fame: based on the number of residents, it has more CCTV cameras than anywhere else in the world. According to data collection institute Statista, it holds the world record of 119.6 cameras per 1,000 inhabitants. Could this be because it is home to Taiyuan Satellite Launch Centre, from where China’s launch vehicle Long March 6 is sent up into space?

The mystery remains unsolved. Meanwhile, the otherwise rather unimposing capital of Shanxi Province in the north-east of China has become the holder of a wholly different record: in 2021 Taiyuan’s Botanical Garden was completed, with its three domed greenhouses. Built in the shape of clam shells, they have a free span of over 90 metres. The broadest of the three domes is one of the largest such timber lattice structures worldwide, if not the biggest of them all.

But there is another reason why this is architecturally relevant, as Austria’s Delugan Meissl Associated Architects (DMAA) supervised the building of Taiyuan’s Botanical Garden. That is to say, they created an artificial landscape with hills, lakes, waterfalls, paths and buildings. Incidentally, star architect Shigeru Ban has built a huge timber lattice construction of similar interest: the Swatch Headquarters in Biel.

China is sometimes labelled the “Black Giant” as its economic miracle is largely based on the extraction of coal. However, the country is making its mark with increasing frequency on the environmental stage as well. Upmarket recreation areas are planned in or near cities, for instance. Indeed, the organizers are hoping to attract flocks of visitors.

Research centre in the Botanical Garden

And so the architects were instructed to turn the former coal-mining area into a landscape park. Roughly 400 km from Beijing, the city is home to industrial works – coal mining, iron smelting, and manufacturing stainless steel and aluminium. At the same time, the purpose of this new construction project was to provide the infrastructure for researching natural ecosystems. It also offers people access to its knowledge.

The project therefore also envisaged the construction of a central entrance building with nature museum and administration facility. Plus three greenhouses, a restaurant, a bonsai museum and a related research centre with library and staff area.

However, the heart of the project consists of three greenhouses in the shape of clam shells. A lot of technical know-how needed to be pooled for their construction: energy design, thermal protection, structural engineering, glazing, assembly and logistics all required careful planning. The structural engineering for the timber lattice domes was the responsibility of German company Bollinger + Grohmann.

The design incorporated detailed knowledge of the local climatic conditions, the thermal demands inside the structure and the structural efficiency. Key parameters for planning were air circulation, lighting, thermal heat production and storage, and water catchment for the plants.

All three timber lattice domes are made from double-curved laminated timber beams arranged in two or three intersecting layers. An early decision by DMAA to use as much timber as possible enabled most parts to be preassembled.

The domes are glazed with panes of glass that are also curved. Some of these are windows that can be opened. Viewed from above, the main beams look like shells that fan out from north to south. The degree of glazing transparency adapts along the building’s north-south axis, and ranges from ultra-transparent along the south-facing surfaces to fully opaque on the north side.

This allows sunlight to be used to the best possible effect. Bespoke air-conditioning systems are integrated into the facade design. And a thermal power station operated with biomass supplies the building with energy and warmth.

The tropical garden will evolve under the largest dome. The second pavilion recreates a desert habitat. The smallest dome is located by the lake and houses the exhibition of aquatic plants.

A large entrance area welcomes visitors to the Botanical Garden. Once inside, they walk up an outside staircase and through a circular opening out onto a huge roof terrace. From here, they enjoy a view across the entire park. The observation deck extends out over the water and points guests in the direction of the three greenhouses.

The terraces of the bonsai museum are laid out in concentric circles. Visitors walk along a path that reflects the principle of a domesticated natural landscape. After all, a bonsai tree is actually a little tree grown in a pot, kept small by cultivation techniques such as cutting the shape, roots and leaves and brought into a desired shape by artistic design. Bonsai art originated in the garden art practised by Chinese emperors.

Free-flowing dialogue between architecture and landscape

The research centre contains laboratories, ateliers, offices, workshops, meeting and lecture rooms, and a library. It is structured into several pavilions of varying sizes, linked by a shared block at ground level.

Visitors instinctively understand that the entire ensemble of buildings is a free-flowing dialogue between architecture and landscape, on a total area of 182 hectares.