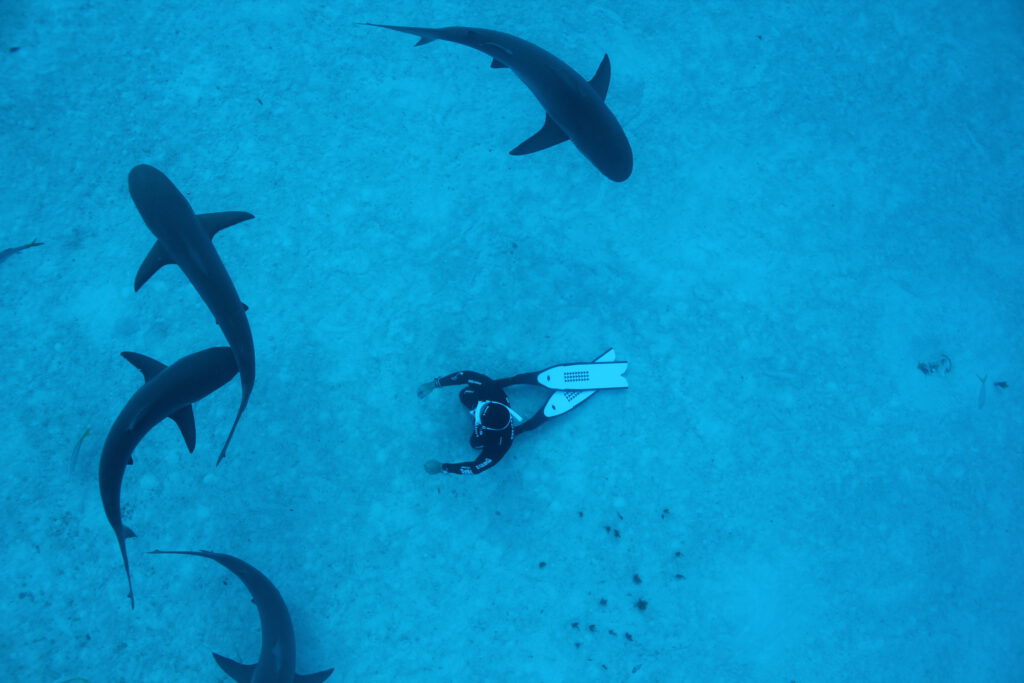 At people who throw their rubbish out the window. At everyone still gleefully drinking water from a plastic bottle. At politicians whose solutions only look good on the surface. And at everyone that has stopped thinking and acting independently. With his “7Oceans” project, he wants to better protect the oceans. Not just because he loves them – but because all of our lives depend on it.

Every secound breath we take comes out of the oceans.
Including our own.

Do the oceans still need saving?

I’ve always been an optimist and I always will be. That’s why I say “yes, but…”. In my opinion, we need to say goodbye to unrealistic scenarios that are unfortunately more likely to be heard in the current narrative. We need realism, solutions that people can actually implement. For me, it makes more sense to give lots of people a bit more responsibility than for a few people to totally change their way of life.

The oceans are normally “only” linked with plastic waste. But the problem we’ll have if we don’t look out for the oceans is much bigger.

In Austria, very few people understand why even we are dependent on the ocean. The horizon ends with the mountains and global connections can appear to be misunderstood. Every second breath we take comes out of the oceans. Including our own. To be fair, we should give the topic more attention. Up to now, we’ve only protected 3% of the oceans – that’s nothing! Our goal is to safeguard 30% of the oceans with protected areas by 2030. And that’s the only chance we have, because the climate is controlled largely by the oceans.

You’re a free-diver, multiple word record holder and have worked as a stuntman. How did you become an environmental activist?

I did my first dive with a tank in the Red Sea when I was 16. I’ve been back there countless times since. As a child, I watched all of the films by Hans Hass and Jacques Cousteau and I know what the Red Sea looked like in the 50s and then 30 years ago. The transformation to today is shocking!

Then the topic of plastic waste gained more traction on social media and I saw the film “For the love of the game” by David Beckham. He wanted to give something back because he’s grateful for everything he’s got in life. That inspired me and led to my 7Oceans project. I wanted to give something back to the sea as well. I want tobe the mouthpiece of the oceans. And offer a platform for solutions at the same time.

You discuss many topics through 7Oceans: how plastic is polluting the seas, climate change and the resulting coral bleaching, overfishing, ghost nets, the plundering of the seas, shipwrecks and the practice of shark finning. With such a huge range of problems, where do you start and what have you and your fellow campaigners resolved to do?

As the name suggests, we want to dedicate ourselves to the world’s seven oceans. In summer, we’re going to start shooting our film. We’re going to dive in all of the world’s oceans and show their beauty. But also the problems. We don’t want to make a film that leaves the viewer feeling powerless, numb or just wanting to keep looking the other way at the end. I’ve also resolved to show solutions and think it’s really important to appeal to people’s individual sense of responsibility.

What upsets you the most?

The fact that most people won’t take on any more individual responsibility. That we know more about Mars than about the oceans. That there are people who think fish don’t feel any pain. That supposed solutions from politicians are so widely accepted.

It’s possible to do something on a small scale and the more people that do something, the more impact these small measures will have. I’m convinced that there are solutions for all problems.

What do you mean by that?

Electric cars, for example. At the moment, we’re expected to all be driving electric cars by 2030. But I wonder whether an electric car with its huge battery can really be the solution? How do we get all the components? By exploiting the depths of the ocean on the hunt for nickel and other similar materials, releasing metals that poison marine life. What do we do with our old diesel and petrol cars? Send them to Africa! Are they suddenly less of a problem over there? What do we do with the batteries when they stop working? What are the risks in the event of a crash? What impact does the battery have on our body when we’re sitting on top of it?

In my opinion, there must be more promising solutions than electric cars, but the industry has invested so much money that now they want their profit from it. I predict that in ten years, we’ll be told that electric cars unfortunately aren’t the solution. At the moment, we’re putting all our faith in natural gas or e-fuels.

You say the example of the shark can be used to explain a lot. Can you tell us a bit more about that?

If we look at the ecological pyramid of the ocean, the shark is right at the top. Sharks are the governors of the ocean, meaning there aren’t that many of them and they only reproduce with great difficulty. Nature must have considered that, because they’re the strongest. But if you remove the shark from the top of the pyramid through shark finning and other methods, animals further down in the pyramid then breed too much. That’s how the viscous circle begins.

When nothing has a predator anymore, the ecological pyramid dies out completely and then the reefs are dead and empty. And if the ocean dies, people die. Unfortunately, there are still far too many stupid people who don’t understand that the shark is absolutely worthy of protection.

What’s the problem with the oceans, why are people paying so little attention?

The problem, which is also a metaphor, is: we’re standing on the beach and looking at the surface of the water. Everything looks beautiful. But what about underneath?! There aren’t any more fish because they’ve been totally wiped out by dynamite fishing, there are no sharks because they’ve been hauled out despite the ban on longlines. We’re always looking at the surface of the ocean, but we need to submerse ourselves to see the problems.

But people are now aware of the garbage patches.

Yes, and now you can imagine what it looks like underneath. And that’s only the tip of the iceberg. But we come back to the problem of protecting the oceans, because in my opinion, the biggest problem is how to deal with international waters. No one feels responsible for it. Dynamite fishing is more or less unopposed here, but even in protected areas, Chinese fishermen outsmart the protective features and haul hundreds of sharks out of the water, only to then throw their living bodies back into the water with their fins cut off. It’s been so long since international warships were there and the perpetrators immediately held to account that nothing will change.

So what can be done?

People need to be told the truth. I think the poles will melt and towns on the coast will be submerged. We need to act quickly to work out how to prevent that. By that, I mean structural solutions or relocations. It’s also true that there are too many people on the planet. So dramatically reduce greenhouse gas emissions, don’t buy any more plastic bottles, eat less meat and stop disposing of waste in nature.

I mean, what is the f***ing problem with chucking your rubbish in a bin? Most importantly: think about how to act responsibly.

I want to be the mouthpiece of the ocean.
And offer a platform for solutions at te same time.

A multiple free-diving world record holder and the founder of 7Oceans – for the love of the oceans.

Under his leadership, 7Oceans organises trips, dives and events in order to raise awareness and donations to help solve the 7 problems identified. The journey with 7 dives in 77 feet in 7 oceans will be the kick-off to start the project.

A documentary road movie will show the beauty of the oceans and also the impact of human behaviour.