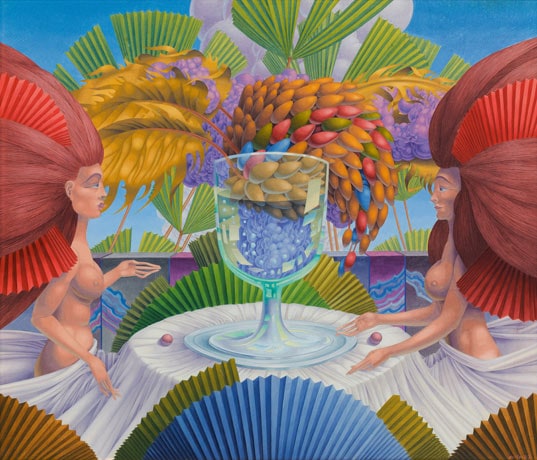 The Auction House im Kinsky is very lucky to show in its Christmas Auction a special room dedicated to the Phantastic Realists. Could you explain this art movement?

Astrid Pfeiffer: The Viennese School of Phantastic Realism emerged in the 1950ies. It picked up the thinking of the 1920ies: the surrealism and the psychoanalysis, much discussed in between the wars.  The Phantastic Realism emanated after WWII from the Viennese Academy of Fine Arts, as a way to answer to the Nazi times. The most prominent representatives are Ernst Fuchs, Arik Brauer, Rudolf Hausner, Anton Lehmden, Helmut Leherb and Wolfgang Hutter, also Peter Proksch and Kurt Regschek.

How can this art movement be best described?

Astrid Pfeiffer: They used fantastic-unreal motives, which were put to the canvas with technical perfection. The care and tradition of the painting technique of the Old Masters, especially the glaze in the style of Flemish and older German painting and finally the mannerisms were important. On top of that, there was the influence of the psychoanalysis, which had originated in Vienna.

How popular were the Phantastic Realists on the art market?

Timea Pinter: Their first group exhibition took place in 1959 at the Vienna Belvedere Museum. As mentioned, this group differed wildly from the abstract Painting style popular at the time. This exhibition therefore helped the artists to quickly gain international recognition. Their bizarre, fantastic dreamworlds full of surprises were much applauded and made Phantastic Realism one of the most successful art movements in the Austrian Modernism.

Hutter’s motifs, like this one, often have something very stage-like about them – not least due to his numerous commissions for stage designs. However, after it became clear to him that the actors’ gestures, words and language could not be subordinated to the image, but rather that the image had to adapt to the theatre, he later described his relationship with the theatre as a “love-hate relationship” – a fact, however, that ran counter to the intention of his art.

Wolfgang Hutter is known as a founding member of the Viennese School of Fantastic Realism. Together with Ernst Fuchs, Rudolf Hausner, Anton Lehmden and Arik Brauer, the surrealist group had emerged within the Art Club, which had existed since 1947, and celebrated international exhibition successes from the late 1950s onwards. However, the name “Viennese School of Fantastic Realism” was not invented until 1958 by the art critic Johann Muschik.

What do you think when looking at the fantastic – and fantastically large – painting by Wolfgang Hutter?

Astrid Pfeiffer: It is a truly museal painting! And it carries the poetic title “Sundown”. One could look at it for hours and still discover new details – this is masterly executed! Hutter creates a whole fantastic universe – a Hutter-World – in a three meter wide painting. I would call him a true magician of painting.

Does it touch your emotions?

Astrid Pfeiffer: When looking at it, I am reminded of the “Garden of Delights” by Hieronymus Bosch, also works from Botticelli, Brueghel, many large landscapes in the history of art come to mind. All these still emanate an incredible aura and draw endless fascination. The great technical mastery, the old craft, the passion underneath it all – you can feel it all.

This is real art to me, namely that talent and passion in a work of art will survive the test of time, and keep touching people.

Since the beginning, Rudolf Hausner has reflected on himself and his life in his work, devoting himself almost manically to an intensive introspection. Hardly any other oeuvre resembles such a continuous narrative in a constant confrontation with his own person and his own experience as Hausner’s does. In view of this, the difficulty of classifying his work, which is always attributed to the Viennese school of “Fantastic Realism”, but also clearly shows surrealist traits, also becomes apparent. Hausner himself preferred the term “Psychic Realism” as a reference to the introspective character of his work (Cf: Hans Holländer in: “Rudolf Hausner. Work Monograph, Offenbach 1985, p.23)
In his self-examination, Hausner arrives at insights that he articulates by means of his likeness – the “Adam” figure – which goes back to his mirror image as a model. Hausner does not shy away from the female pole either, creating the figure of the “Anima”, which originates from C.G. Jung’s archetype teachings. She is identified and interpreted as Hausner’s feminine side, later also appearing as “Eva”. Since the end of the 1960s, the painter has often given the face of his last wife Anne to his erotically exaggerated female bodies with protruding pelvis, which are always depicted in a similar way. Often, however, Hausner also refrains from depicting the face and thus from personification.

In the present work, the visual field with mouth, eyes and nose dissolves into an expressive jungle of colour. Hausner may have embodied his self-destructive drive or other inner conflicts in female figures like this. (Cf: Beate Elsen-Schwedler in: Rudolf Hausner. 1914-1995, Sigmaringen 1996, p.88).

Could it be said that now is the perfect moment for this kind of escapism?

Timea Pinter: Sure – even though their art was considered for many years as “kitsch”, they are continuously gaining recognition and visibility.

Astrid Pfeiffer: I agree. The works in this auction are a particularly good investment. They have stamina and timeless elegance.

Timea Pinter: The art of the Phantastic Realists offers us the possibility to escape our world for a moment: The viewer is led into a more ideal, fantastic world.

And a personal question: How important is fantasy to you?

Astrid Pfeiffer: As a child, I used to drift into fantasy worlds… And I still love looking, really looking at pictures. What world is hidden behind a painting? Which thoughts? Which emotions? The Viennese Phantastic Realists gift us with many supplementary worlds on top of our own.  Timeless worlds which we can visit whenever we want– how wonderful right now, when we all have to stay put…

Timea Pinter: The real world can be cruel and devoid of fantasy. Fantasy allows us to escape. And I think that this is important at any time, but especially true today.