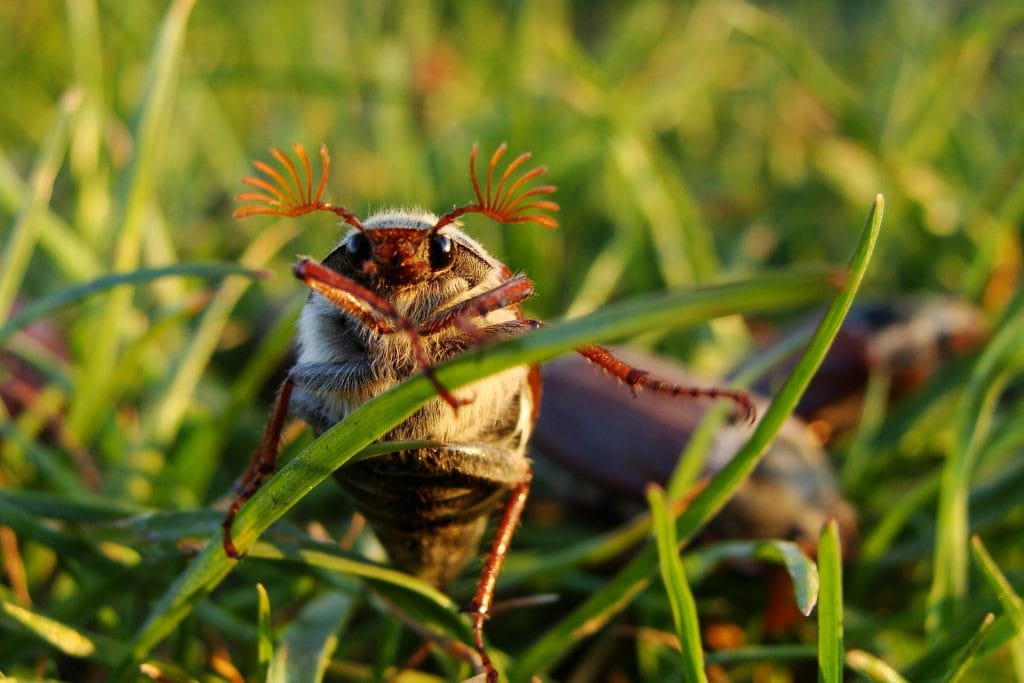 The may bugs go on strike

When Jay Sugg woke up, he felt hungover. It was dark and he couldn’t move, but then he didn’t even know the words “darkness” or “movement”. “What’s wrong with you, lazybones?” someone nagged at him. “All of your brothers and sisters are already munching their way through the plant roots, working hard to dig the passages, and there you are with your feet up.” Jay Sugg stretched and yawned. He didn’t know what “passages” meant, had never heard of the word “feet”. After a couple of days, he knew exactly what was going on.

He started in his first year at May bug school. A year later, the fourth-years got a hard cape under which their wings grew, then they crawled upwards and took flight. In doing so, they transformed from earth dwellers that lived in the soil into extra-terrestrials. Soon, there was barely a single family that didn’t have someone flying up above. All of them told of the wonders of life in the open air, how it was bright and warm and colourful. Only the worms reckoned it was unhealthy and dangerous up there, that there were terrifying monsters by the names of Wind and Rain and Human, who would skewer you on a hook and had unsightly spikes and horns growing out of their heads.

But none of what the worms said made any sense.

However, when even the moles started going on a tirade about life in the open air, spoke of the dominance of the earthlings and the benefits of the darkness, the young beetles became suspicious. “Nonsense,” objected their old teacher. “Moles, famous for their cosmopolitan attitude, of all people. Such prejudice! Life up above is magical and wonderful, you’re free.”

“Up there is the future!”

No one ruled out the possibility that things could also be different. Some regarded the teacher as backward with outdated views. “We’ll be controlled and manipulated! Someone’s making a business out of it. There’s no life to be had up there,” said some. “The story about the wings is a lie, we’re being drawn towards a light that isn’t even there.” Stories like this were thrown back and forth. And when Jay Sugg’s class was about to graduate, no one was ready to put on their hard cape. They all went on strike.

No one wanted to give up their home for an empty promise.

They would much rather watch the grass grow from underneath, here in the good old musty soil. Word got to one of the most determined guys who had got around a lot on earth; he’d seen five gardens. When everyone realised there would be a season without a graduating class, Jay Sugg stepped forward, or rather he crawled, and mumbled that he couldn’t understand such small-mindedness. “You’re full of prejudice, incapable of adapting to new situations. I’m going to make the flight anyway, and it doesn’t matter if I break my neck doing it because I don’t even have one.” Soon he’d hooked up with the first ones to get their wings. And then they were off. There’s every chance that there had never been a May bug that moved with as little grace as Jay Sugg, but my goodness, he flew. It was incredible. He could take in the world of things with a single thought.

Suddenly, he could see everything in a totally new light.

Brightly coloured chasms opened up, blazing green hillsides, trees, a scorching blue sky. The world was hunched, but unspeakably beautiful. A mosaic of iridescent rainbow facets. And at night, the starry sky opened up and gave the daisies below their faces. It was incredible. It was paradise. But shadows soon descended. The appearance of the bird totally nixed the mindset of the May bugs and the enthusiasm with which they’d flown through the surroundings vanished. The May bugs realised that they were easy prey. But did they regret ever having hatched? “No chance,” said Jay Sugg the May bug.

“This experience of life was worth it.”