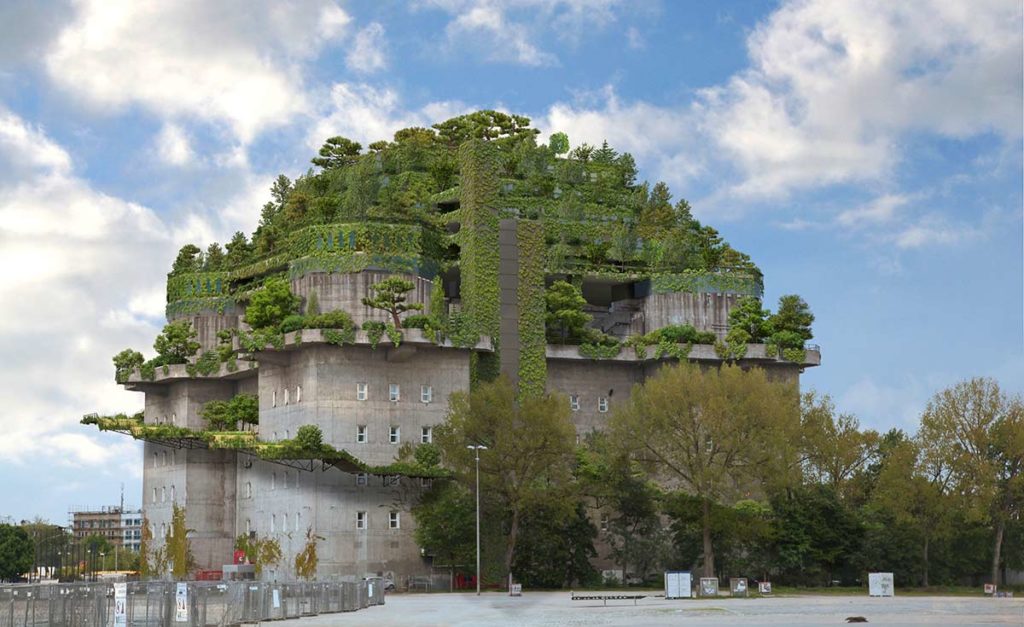 The redevelopment of an above-ground Nazi-era bunker is Hamburg’s largest building project since the Elbe Philharmonic Concert Hall. With spectacular rooftop gardens and nhow Hamburg design hotel, this new landmark in the heart of the St. Pauli district is sure to become a magnet for visitors.

A meandering green walkway, lined with shrubs and trees, winds its way up around the outside of this massive concrete giant. Visitors are rewarded with captivating panoramic views of St. Pauli and local neighbourhoods. On top of the old bunker, an extraordinary natural oasis overlooks the roofs of the city. The urban gardening areas are cultivated by residents from the surrounding area. After passing through the gardens, guests can access the lobby of the hip nhow Hamburg design hotel, which is nested in a pyramid-like structure on top of the bunker. The rooftop garden and rooms allow them to gaze from the local neighbourhood all the way to the Elbe Philharmonic Hall and the huge container cranes in the port.

Opening in 2021, the new nhow Hamburg is built on the roof top of the St. Pauli bunker. It will feature 136 rooms as well as a bar, cafe and restaurant. The integrated and creative nhow brand seamlessly joins the futuristic concept of the bunker initiative.

In a nutshell, that’s the vision for the extensive refurbishment of Hamburg’s largest anti-aircraft flak tower. The “Bunker on Feldstrasse” – soon to be called the St. Pauli Bunker – is destined to become Hamburg’s latest star attraction. And this is not just because of its extraordinary architecture and tourist appeal. The transformation of this bunker into a vertical urban recreation area is a prime example of participatory design. The general public were not brought on board here merely as token outside input, but rather as key stakeholders in the project. During the planning stages, area residents were asked to decide for themselves what to do with this grim relic from the past.

A remarkable planning approach integrated many people into the design process, including area residents and the creative scene of the surrounding Schanzenviertel district. The Hilldegarden neighbourhood initiative played a decisive role in determining the use and architectural development of the concrete monolith. Local residents decided in favour of a venue that would foster a sense of community, provide a recreational area and pave the way for an entirely new form of urban landscaping. The plan calls for the creation of an elevated park that will be a new kind of green oasis in an urban setting. Around 180 people and experts from 25 different professions are involved in creating this pioneering project of landscape architecture.

To ensure that the roof of the bunker doesn’t appear grey in winter, the landscape architects have opted for evergreen plants from mountainous regions, such as cypresses, junipers, pines and cedars.

The bunker will be 80% green, even in winter,

landscape architect Felix Holzapfel-Herziger says in response to critics who fear that the project will lead to nothing more than a grey monstrosity crowned with a glass penthouse.

According to the plan, the roof garden alone will have over 100 trees and 30 large shrubs. Furthermore, the terraces will be landscaped with an additional 80 trees, bushes, hedges and hanging plants.

The architects planning the bunker have come up with an inclusive overall concept. The old bunker is to receive five new pyramid-like storeys. Along with the nhow design hotel, there will be space for sports activities, exhibitions and concerts, as well as artist-in-residence accommodation. The current recording studios, clubs and companies from the creative industries will remain in the bunker.

Merging the past and present

Architects and neighbours also debated how best to deal with the historical legacy of the bunker. Everyone agreed that the bunker’s dark past should not be concealed under a veneer of hipster design. Instead, a section of the newly built premises will serve as a memorial in honour of the victims of the Nazis. Coming to terms with the history of the building was also an important factor in the choice of hotel operator.

It was very important for us that the hotel takes an open-minded approach to the creative neighbourhood and also demonstrates responsibility towards the history of the bunker. The individual character of the nhow design achieves this in an exceptional way:
it respects history and, at the same time, points to an optimistic future,

A design hotel with a view of the neighbourhood

The new establishment, nhow Hamburg, will be the third addition to the family of hotels in Germany operated by the design and lifestyle brand, which belongs to the NH Hotel Group. The operator has pledged an innovative approach, fresh design and breathtaking views of the local Hamburg district.

Our design and lifestyle brand has an open approach, and nhow Hamburg is dedicated to integrating into the neighbourhood and the creative scene,

To emphasize the merits of this approach, he points to their flagship project: nhow Berlin. In Berlin the company has ensured that its hip hotel complex also includes space for two professional recording studios and a stage that features local artists and performers. The operators have thus managed the delicate balancing act of attracting local Berlin residents and hotel guests alike.