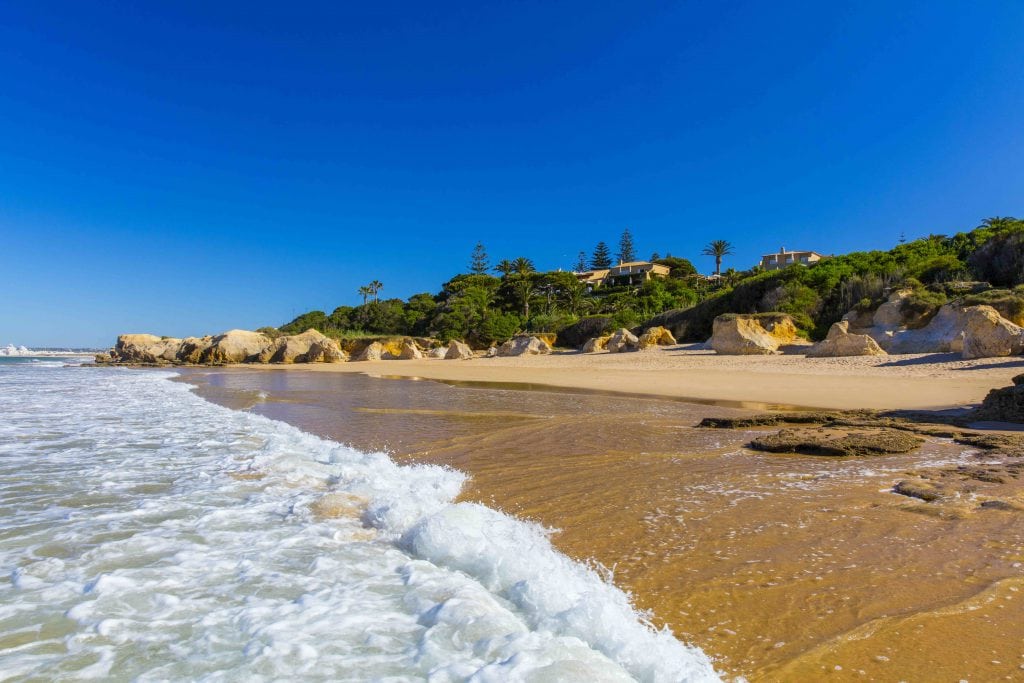 In the style of a little Moorish palace, the Vila Joya lies nestled in a lush garden of palm trees, cypresses and agave trees that contrasts stunningly with the protruding bright cliffs.

The house of joy

Here on the natural coastline of Praia da Galé, it goes without saying that the sun welcomes you every day on holiday with its unforgettable spectacle. As a result, the Vila Joya, which was named after its hostess by the way, also lives up to its name’s second meaning: the house of joy!

Guests at the Vila Joya can even admire the natural spectacles totally relaxed from their beds. Each room, except for the small driver’s room, has a wonderful view over the sparkling Atlantic and of the sun. The sounds of the sea and seagulls crying are the first things to wake you up in the morning as Vila Joya is situated quite far away from the next town of Albufeira. The property has direct access to the beach, a small private sandy bay is revealed after just a few minutes’ walk. All the rooms and suites on the ground floor also have direct access to the garden.

Anyone who would prefer to walk for kilometres along the beach from Galé can hike along the dunes on an idyllic path or play with the waves lapping the shore. It doesn’t matter whether this is before or after breakfast, which can be served on the terrace almost all year round as a result of the mild climate. While guests escape the hustle and bustle of their everyday life, all their wishes are fulfilled quickly and discreetly at Vila Joya.

“Personalised service” is all part and parcel of the hotel’s style.

A whole range of activities

A number of regular guests value this informal atmosphere at Vila Joya. They can totally chill out here, freshen up in the hotel’s own spa, go and play golf, surf or horse ride. In the low season, when the beaches are not as overcrowded yet, horse riding is even allowed right next to the water. Surfers show off their skills in the water along with more and more paddle surfers over the last few years. The picturesque coastal landscape and hinterland with its gentle hills and countless almond, fig and orange trees are also worth taking a look at from the air – a parachute jump provides a whole new perspective!

However, this area is unimaginable without its golf courses. 36 courses can be reached in less than 45 minutes from the Vila Joya alone. You won’t be able to resist the championship courses within walking distance and of course the personal support at the Vila Joya Golf Academy by golf pro José Ferreira.

Apart from that, sport can also be enjoyed without even leaving the hotel: in Vila Joya’s gym with views into the distance over the horizon. Two outdoor pools, one of them heated, invite you to take a swim, and the heated Jacuzzi is a warming opposite pole to the sometimes quite fresh Atlantic breeze. Inside the spa, every single cell in your body is stimulated, sometimes even by healing sounds during a sound healing session.

After sport or the spa you can rest brilliantly in the garden and in the rooms designed with accents typical of the country. Subtle natural colours, Portuguese cork flooring but also colourful hand painted Portuguese “Azulejos” tiles give the fourteen rooms and eight suites their unique flair. Anyone staying in the Royal Suite 1001 can almost relive the fairy story of One Thousand and One Nights.

In the evening guests at the Vila Joya gather for a real highlight: they dine in regal style at one of the “World’s 50 Best Restaurants by S. Pellegrion” and are indulged with culinary delights by the chef Dieter Koschina with his two Michelin stars. Whether it’s guinea fowl with black truffles and artichokes or Bacalhau (Portuguese salted cod) with beetroot and yoghurt, you can find the perfect accompanying wine in the hotel’s own cellar with its 12,000 bottles. Arnaud Vallet, Sommelier of the Year 2012, will be happy to advise you. It’s a special honour to be invited to dine at the Chef’s Table. Apparently, Dieter Koschina reveals one or two of his culinary secrets there now and again…

Vila Joya is a MEMBER OF LIFESTYLEHOTELS