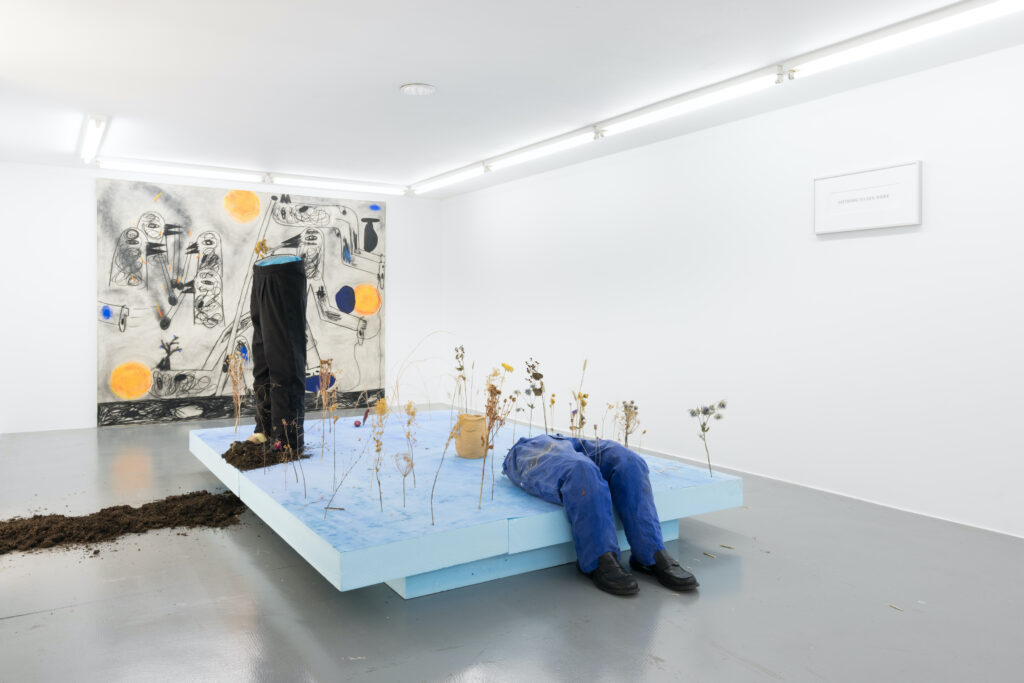 The Kunstverein Friedrichshafen will be showing a solo exhibition by Jan Zöller from June 25th to 21st of August 2022 under the title “For every thing that is shown, some thing is hidden”.

Jan Zöller creates fantastic worlds in intense colors and with clear forms, which nevertheless never lose touch with reality. In his works, the artist, born in 1992, reflects on the relationships and dependencies between people and systems, social and societal dynamics and economic cycles. In doing so, he uses his own iconography of recurring motifs.

Urban structures appear in the form of fountains, walls and street lamps, nature as trees and bushes or stylized magpies and ravens. Trouser legs also appear again and again, running restlessly through the pictures. Sometimes they are disembodied, sometimes their upper bodies consist of fountain pools or the aforementioned birds. They are personifications of the human. Everything is in motion, even hectic, which reveals the actual theme of Zöller’s works: the integration of the individual into a late capitalist society of exploitation and performance, from which there is no escape. Not even in or with art. And so Zöller also repeatedly addresses the art business with its production, presentation, and reception processes, customs, and codes.

Although exhibiting also means showing at the same time, in “For every thing that is shown, some thing is hidden” he also redeems what is already implied in the title. As soon as one enters the exhibition, one walks towards a large wall on which only a small paper work with the inscription “NOTHING TO SEE HERE” can be seen.

If one continues despite this moment of irritation, a huge wall of blue Styrodur blocks the entrance and view into the exhibition space. On the opposite wall, a path of earth ascends towards the corner of the room. Only then does one reach the large exhibition space, where pictures can be seen after all.

Inevitably, in these expansive ensembles, one becomes the restless trouser legs, magpies, and ravens that populate Jan Zöller’s paintings. This goes hand in hand with the fact that the exhibition is also a stage set for a play that Zöller is currently developing with his childhood friend Felix Baumann. The installation of the exhibition is already the first act of the collaboration and serves to test how elements of the visual and performing arts can be combined and enter into an exchange.

Jan Zöller (*1992 in Haslach im Kinzigtal) lives and works in Karlsruhe. He studied at the Academy of Fine Arts Karlsruhe with Leni Hoffmann and Marijke van Warmerdam and at the École nationale supérieure des Beaux-Artes with Jean Marc Bustamante. He received the Postgraduate Prize of the Karlsruhe Art Academy in 2017, was awarded the 24th Federal Prize for Art Students of the Bundeskunsthalle Bonn in 2018, and the working scholarship of the Stiftung Kunstfonds in 2021.