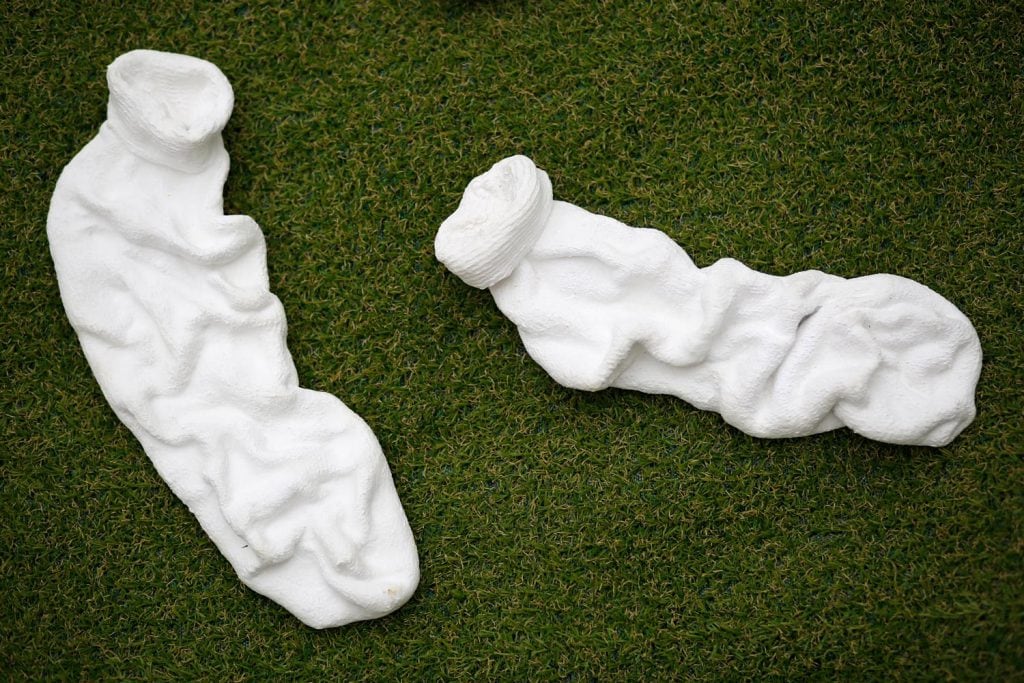 What is of value to me?, Text: Nina Prehofer, Art: Martin Grandits, Photos: Johanna Marousek

Have you been asking yourself this question more often recently? Could it be that, since the coronavirus, we’ve been paying closer attention to what really means something to us, what we want to keep in our lives and what we can let go of?

I can never forgo my first espresso in the morning. There’s a lot of things I would rearrange if my morning routine were in jeopardy and my personal start to the day was suddenly taken away from me. I love everything about it – the smell of the coffee, which seems so much more intense so early in the day, the first mouthful as it hits your palate, the comforting sensation of the warmth spreading throughout your body and the caffeine starting to kick in. Afterwards, I have a cup of herbal tea that gives me an early-morning feeling of giving my body the liquid refreshment it needs. One coffee and one tea – one liquid may cost more than the other, but neither of them could be considered an asset. They’re also not hard to get hold of, nor are they particularly rare. These are all characteristics that would drive up the value of an item. Coffee and tea in the small quantities we use them as individuals are supposedly not that valuable, but after an early start to the day, they mean the world to me.

I also have a very intense relationship with particular objects: with the cup I prefer to drink my coffee out of and, for obvious reasons, with the coffee machine that for the last 13 years has unfailingly prepared the morning elixir that has brought me to life every day. When I look around my home office, I consider what attracts my attention, what has become especially important to me as an object. There are, of course, the books, old and new, that have journeyed with me for many years. I’ve carted every single one of them around with me between different houses, and done everything in my power to ensure they haven’t got mixed up with anyone else’s collection during previous relationships. In doing this I don’t only respect my allegiance to my own books, but also the allegiance of others to theirs. I’ve laboriously carted around with me all of my books, even those that didn’t really grab me, like One Hundred Years of Solitude by Gabriel García Márquez – unfortunately, the winner of the Nobel Prize in Literature just didn’t manage to captivate me with his writing. But I’ve always wanted to take the book with me, as it was a gift with a fond dedication.

Then of course there’s my laptop, on which I’ve written these and so many other pages. It’s a commodity that has incredibly high value for me, and if anyone were to steal it, I would be frantic! Not so much because buying a new one would incur unexpected costs, more because I detest having to familiarise myself with a new device. With me, laptops can expect to have a good home for many years, because the keys work better when it’s me that’s been using them, and I don’t have to suffer the criticism from any IT guys aimed at my file or folder system. I earn my living with my laptop, it accompanies me to countless destinations and it’s my window to the world when searching for ideas, people and stories – something that now has such greater meaning, especially since the coronavirus.

Most of us maintain an intense relationship with things.

They could be the commodities mentioned before that become objects of value to us, things without any recognisable benefit that for one reason or another we become attached to, and of course things that have high material value.

We’ve spoken to Innovation Consultant and author Mario Pricken (see the interview HERE >>) and asked: who actually decides what is valuable and what its value is? “Let’s assume you and I both agree that this USB stick is the most valuable in the world – it wouldn’t do us any good. We don’t have the agreement of others on the market. Value therefore isn’t something that’s contained in an object – that’s one of the most important aspects in the question of value. Value is a projection of our psyche onto an object.”

Just like a film projector, we project value onto objects ranging from our favourite T-shirt to a diamond ring. It’s us that creates the value. That explains everything written above – the coffee, the books, the laptop. Having said that, the more people that agree that an object has value, the more stable that value will become. But there’s a further aspect that’s interesting in establishing a general understanding of value: not everyone can have the object of desire.

When everyone wants it, but only a few have it, an object becomes incredibly stable.

This belief in what’s valuable is well known in the art industry. An original is worth more than a print. A well-curated collection is worth more than a bad one. In this industry, prices are achieved that only our beliefs and desires could ever explain. But you might wonder whether the art industry is now driven less by inspiration or inner desires and more by demand. After all, artists have always and will continue to set up studios, and even have employees. Damien Hirst’s business, for example, is driven by enormous demand – wouldn’t he have been foolish if he hadn’t responded to it? And doesn’t that also change the true value the object holds?

From possessions to experiences

Is the question of value also a question of what we yearn for? Is it a designer handbag, a cool sportscar, a special painting by a particular artist or an expensive watch that makes us feel more attractive when we wear it?

Objects are often just a means of getting to something else, they’re a vehicle. They can trigger emotions in us, but we often only get out of them indirectly what we actually want. And we’re perhaps disappointed when the effect doesn’t last,

So what is it that we want? “Things like love, appreciation, joy, comfort, security, for example,” believes Pricken. In this sense, objects are representatives of our deep-rooted desires that actually have very little to do with material things. That probably explains why many rich people still can’t find inner peace, or why the value of newly purchased objects wears off so quickly.

“It’s not the object itself that is of benefit to people – more often than not it’s more to do with what the object evokes in others. If I have a totally unique sportscar and I’m out on the road, the looks I get because of it give me value. Or a collection – if I have an art collection then surely that is a way of storing value. It could of course be the case that while I find it interesting as a whole, I’m somehow bored of it. But what does fascinate me is when I show it to other people and it brings tears to their eyes. That’s what appeals to me.”

That takes us a little closer to the fact that having value can be a long way from actual monetary value. Perhaps we’ve learned in the last few months that we also find it other things: walking hand in hand through nature, looking for places to be on your own that are as far as possible from another soul, reading a good book in the garden, lovingly nurturing the herbs on your balcony, finding out that it’s possible to bake your own bread or how nice it is to spend more time with your children.

We’ve learned what it means to look at ourselves, to design our schedule in our own favour, to prioritise regular self-care as far as is possible and to say no to yet more things we need to deal with.

– with the simple things, because our options have been limited. We’ve discovered things that are important to us, that have little to do with our otherwise ubiquitous material desires. We have created experiences for ourselves that soothe our souls. We’ve gone to the woods, scaled mountains or settled down in the meadow for a giant picnic, and hopefully recognised the value of these experiences and been able to enjoy them to the full.

When we talk about value, the first thing that comes to mind is something mundane – gold, diamonds, big houses and expensive cars, an extravagant lifestyle. But here is where you have to make the distinction between bling-bling luxury on the one hand, with all its obscene excesses, and genuine luxury on the other hand, as shown by the example of the hotel that Mario Pricken talked to us about. It’s the story of a hotelier who gives his interpretation of what true luxury looks like in the hotel industry:

“When our cleaning staff are doing their rounds in the corridors of the hotel, of course they’re busy cleaning and hoovering. But if they notice that a guest is coming towards them, they naturally stop what they’re doing. They turn off the machine, stand to the side, wish the guest a good morning, wait until they’re far enough away again, then carry on with what they were doing. That’s luxury and it has value. It’s very easy to do and it costs nothing.”

Our perception of luxury is currently undergoing a transformation, as we live in a time when our entire society is experiencing change. In democratic society, the definition of luxury is probably moving more in the direction of that of the hotelier we’ve just described. We would call it genuine luxury. Even though we may still surround ourselves with a few luxury items, we presumably no longer perceive them as such from the outside.

From value to appreciation

In recent months, we’ve been lucky enough to learn a bit more about what is good for us, and have felt to some extent what happens within us when we focus on our own needs. We’ve put consumerism to one side and returned our attention to simple experiences. We may have discovered new sides to ourselves or rediscovered things we’d forgotten, we’ve surprised ourselves with which thoughts we wish to pursue and which new dreams come to the surface. But we have also established, rather painfully, what it is that we miss.

It might actually be the case for one or two people that they missed the Louis Vuitton store, but the majority of us will have become aware of what we actually need in our lives in order for us to feel good. We’ve longed to be able to see extraordinary paintings in a museum, witness passionate performances at the theatre or travel the world in order to discover new insights in different places. It’s not just been a time of spatial restrictions, but also spiritual. We’ve longed to meet and make friends with unknown people in new places. We’ve craved hugs, intimacy and security. It was the feeling of connection that we were lacking, and it’s sure to still be sorely lacking in the months to come – connection with our family and our friends, but also with the salesperson at the supermarket and all the other people in the world that we could have got to know and value.