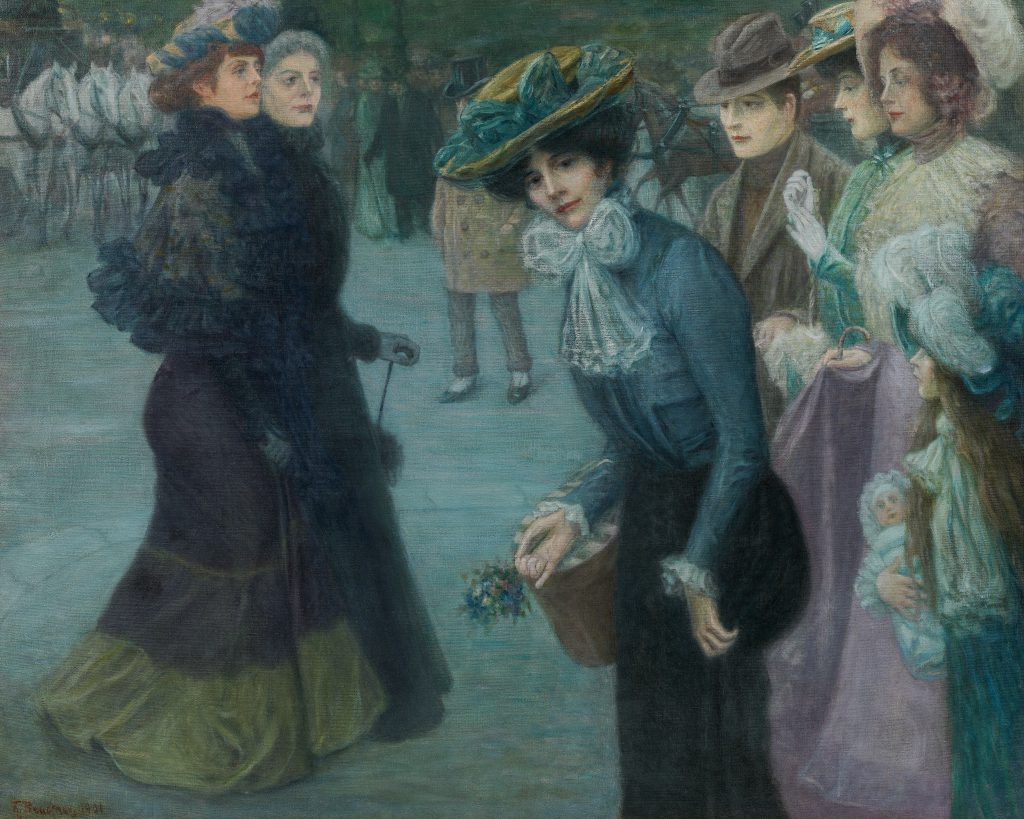 The women at the Kinsky aren’t shrinking violets! Whatever different art periods they may come from, they’re confidently looking out into the world. Please find a selection of fascinating ladies, painted by strong artists, below.

Women in the arts – sensitivity and mastery

Faistauer’s wife Ida has melancholically rested her chin on her left arm, dreaming and withdrawn, she is shown in a slight profile view from the right. They were married in 1913, and unto her early death in 1919 the artist painted her sixty times. The portrait is a very sensitive characterization of the model and shows at the same time the masterful use of color in his early portraits.

The artist is also renowned for his frescoes. In 1926, with the help of some assistants, he completed the Foyer of the Salzburger Festspielhaus, which became his international breakthrough.

“The Jew’s daughter” is a poem from a collection by Achim von Arnim and Clemens Brentano regrouping old German Lieder. It speaks of a beautiful Jewish girl, who does not want to get baptized, event though some men tell her to. She drowns herself in the sea to escape. Kokoschka illustrated throughout his whole life poems and works of literature. Often, these would be published in Herwarth Walden’s magazine “Der Sturm”. This drawing is the title sheet for Walden’s music piece “The Jew’s daughter”.

The work is separated in two styles. The wide and thick brushstrokes used for the man and the background are typical for drawings and oil paintings at the beginning of the 20-ies. The female figure seems fine, almost translucent thanks to small brushstrokes and many spare spaces. On the one side fragile and fleeting, on the other strong and decisive – this distinguishes these two figures. This work is a fascinating translation of the poem into art. Kokoschka displays his virtuoso drawsmanship and aplomb in the depiction of emotions.

Women in the arts – beauty and power

Especially in his early work, Putz centered on the image of the beautiful woman, in different variations. His wife, the landscape painter Frieda Blell, often posed as his model. The third Reich though deemed his art as “entartet” (degenerated) and put a work ban on him.

After having been interrogated by the Gestapo a few times, Putz escaped to South Tyrol. There, he mainly painted castles and landscapes. He died in 1949 in his birth city of Meran.

The figurine of Judith with the head of Holofernes has probably been shaped according to the example of Conrad Meist from 1525/1528 which is kept in the Bavarian National Museum.

Only very seldom they made their way to collectors. Waldes’ female models are nude or only sparingly clothed with fashionable, sexy accessories like shoes or fishnet stockings. Especially due to their intimate character, these erotic subjects count among the most interesting creations of Walde’s Oeuvre. Without doubt, they enrich the work of the “snow painter” by a very special artistic and peculiar side. It is here that the painter could realize his private obsessions, all the time winking at the viewer. The theme of the female nude is one that was always on the artist’s mind, however, it was only relatively late that the painter indulged in it.

Bruno Zach is especially known for his painted small statues in the style of the art deco. He liked depicting tall, athletic, dominant women, including all their female attributes. Here, the wind is lifting the lady’s dress, we can see her high heeled booties and slender legs. Another interesting detail is that of the umbrella handle: it represents a monkey’s face.