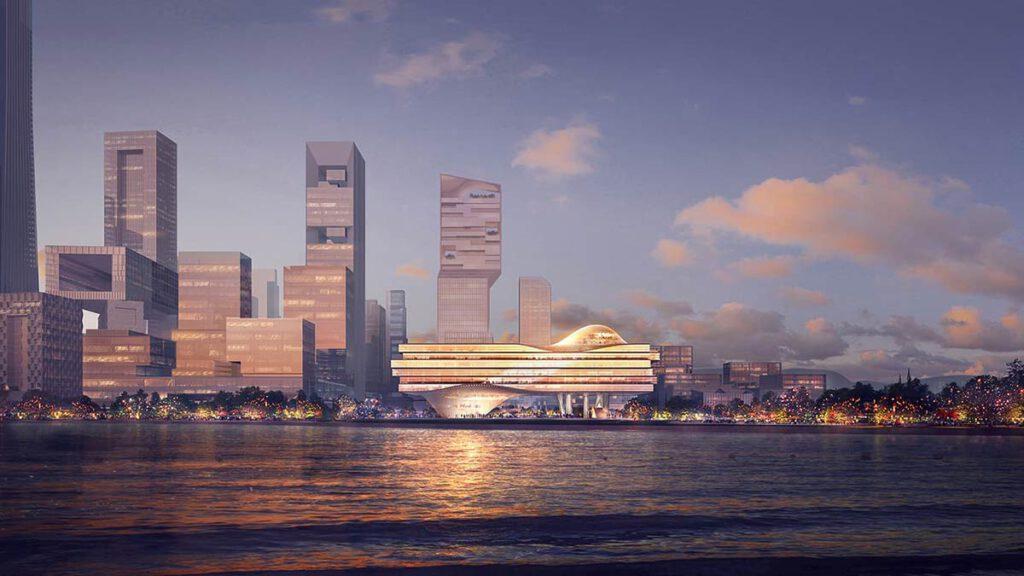 The current pandemic is influencing contemporary architecture. With his Shenzhen Wave, Ole Scheeren is promoting the urban, pandemic-friendly workplace of the future.

Although Ole Scheeren is a German star architect, only a few of his projects are to be found in his native country. Instead, a high density of his signature architecture can be found elsewhere in the world. Ole Scheeren specializes in embellishing the skylines of major cities in Southeast Asia with eye-catching landmarks. His latest design is called Shenzhen Wave. The building is expected to make its own waves in China’s Silicon Valley, and not just visually.

With his “flexible archetype for the future workplace”, Scheeren wants to evoke the brave new world of work for tech company ZTE. At the same time, he wishes to “create a symbol of China’s next digital revolution”. The bold claim: creative oases instead of dreary offices. Individual development instead of work frustration. It is an ambitious mission that renowned star architects have previously been tasked with by major cooperations like Amazon and Google.

A plaza for the people

The former fishing village of Shenzhen north of Hong Kong is one of the fastest growing cities in the world. Shenzhen Bay Super Headquarters Base is being built in this Special Economic Zone (SEZ), which boasts the highest per capita income in China. Scheeren’s Wave is expected to cause more than just a ripple when it opens in this district of corporate headquarters and technology giants by 2023.

A new plaza beneath the suspended volume gives public space back to the city.

The architects want to create a connection with the urban context and integrate the local community. Their Shenzhen Wave aspires to be viewed as a living part of the city. The structure floats at a lofty height above ground level, creating a generous space below: “A new plaza beneath the suspended volume connects the waterfront to the urban fabric behind and gives public space back to the city.”

Not a skyscraper, but packed with superlatives

With a length of 120 metres and a height of 60 metres, the design is not a typical Scheeren building. The architect with a penchant for the vertical was limited here by the local building specifications. So instead of a skyscraper, he designed a landscraper. But the planned building is by no means lacking in potential superlatives.

In the rendering, the individual floors look like documents sloppily stacked on top of each other, with people bustling about on terraces in the spaces between them. Each storey is the size of one and a half football pitches and offers completely unrestricted layouts. Scheeren is declaring the office cubicle a thing of the past.

Flexible working in the Wave

“The project was imagined as a living organism that generates new ways of working and living together,” the concept says. The design aims to anticipate the development of the future workplace in the wake of the COVID-19 pandemic. At the core of this concept is ensuring the maximum adaptability of working environments.

The project was imagined as a living organism that generates new ways of working and living together.

The wave that gives the building its name curves out of the glass structure in two places – once downwards and once upwards. Inside the body of the building, the wave results in an atrium running diagonally that provides air circulation, views and meeting places. While the lower wave encloses the lobby and a cultural area, the roof wave is flooded with daylight and aims to meet the leisure needs of employees.

In this area, lush tropical plants create the impression of a park under a cheese dome. A fitness centre, café and bar enable stressed employees to unwind after work or while taking a break. Basically, everybody working in the Wave can remain inside the building all day, meeting all their needs in the same place – which is only to be welcomed in these pandemic times. This is a self-sufficient world reminiscent of science fiction thrillers, although its idea of a future workplace is probably not to everybody’s liking.

In the future, up to 5,000 people will work in the Wave. And if he has his way, Scheeren says, they will not only work there, but “develop as social beings”. He sees his building as a prototype for the new urban way of working that is experienced as a part of life and not as a downside. It is truly an extremely ambitious goal for an architectural project. 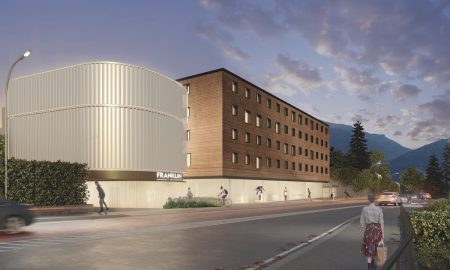