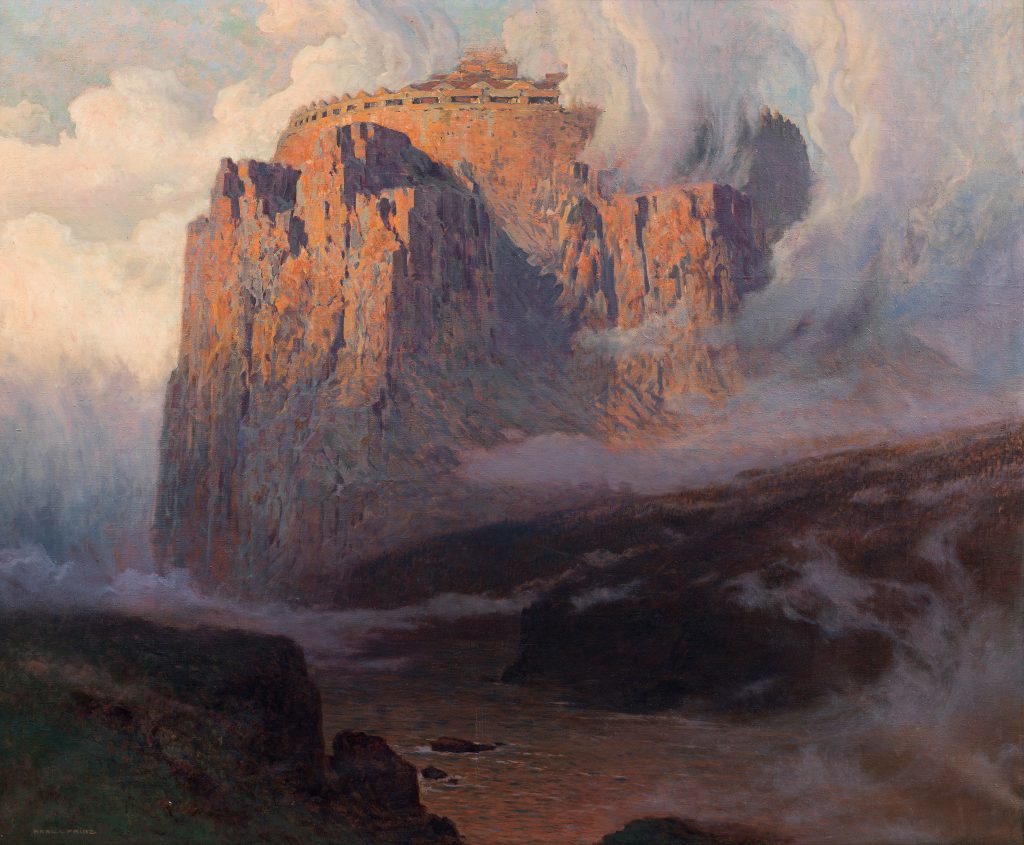 As the way to the sea is becoming difficult due to travel restrictions, a trip to the local mountains is proving more and more attractive. Artists have always found inspiration in the call of the mountains…

Auction house im Kinsky has gathered some real and imaginary places for a journey into the mountains for you.

For Oskar Mulley, who originated from Carinthia and settled in Kufstein in 1918, the Tyrolean mountains proved apt for inspiration. They are a central theme in his Oeuvre. Mulley drew his sketches locally, but then changed the existing topography in his paintings to suit nature and architecture to his compositional ideas. In a stringent structure, the mountain farms, so very typical for this region, seem to be integrated in the alpine landscape. This style granted him wide recognition.

This depiction of a mountain farm stands for Mulley’s typical, often repeated art of composition. The farm is in close vicinity, in the background we can see the overlying rocks, at the top the eye is drawn to a sunny piece of blue sky. In between the farm and the mountains in the background, there is the feel of an abyss. The resplendence of this painting is based on the exact attunement in the use of strong colors. Using his palette-knife, Mulley handles the colors with energy, layering a number of thick coatings and therefore making us see his means. This decisive use of color enforces the monumentality of the painting.

In this picture, another master of Modern Art, Oskar Stössel, brings the Lake Wolfgang and the surrounding mountains to life. However, the artist had to leave this favored place behind in 1938, as his art was considered “degenerated” by the Nazis and he had to flee to the US. There he continued his work successfully, even portraying President Franklin D. Roosevelt. In Austria, he was rediscovered in the years 2000 thanks to a special show at the Joanneum.

Hans Weber-Tyrol counts among the most famous artists of Tyrol in the first half of the 20th century. He was known as one of the main painters of the expressive late impressionism thanks to his many oil paintings and watercolors. After his studies in Munich, he settled in South Tyrol in 1929. The wide spectrum of his work encompasses mainly motives from nature and culture from Tyrol and around the Mediterranean.

Another mythical place high up, surrounded by clouds, needs to be referred to: Walhall, the hall of the dead soldiers in the northern mythology. However, this magic place also exists in reality; it is a memorial in Bavaria, where important German figures are remembered by marble busts and commemorative plaques.

This wonderful screen print by Friedensreich Hundertwasser shows another imaginary, green mountain landscape. One finds the artist’s love of all the colors of the rainbow, as well as one of his favorite shapes: the drop. On these hills, refreshment is always at hand.