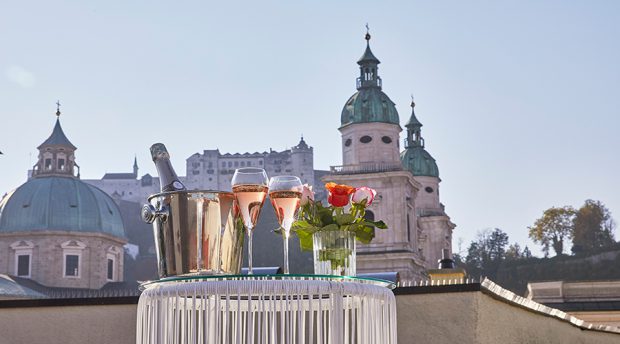 “The entire city is a stage.” It is based on this vision that Max Reinhardt, Hugo von Hofmannsthal and Richard Strauss initiated the Salzburg Festival 101 years ago. Today, the stage even extends to the exclusive Hotel Goldgasse in the beautiful old town of Salzburg.

It’s back again for summer 2021 and we can hardly wait: the city of Salzburg will once again be undergoing its annual metamorphosis and transforming into one of the most prominent festival stages in the world. After the challenges of the past year, many people are longing for more art and culture in their lives, and who better to quench their thirst than the city of Salzburg during festival season? We can expect the first highlights already during the Easter Festival between 2 and 5 April 2021, as well as during Whitsun between 21 and 24 May 2021. But the main event is planned for summer. Between 17 July and 31 August 2021, the party is in town and artistic performances will abound – including the famous Jedermann in the Cathedral Square, as always. Playing the lead roles this year will be Lars Eidinger as Jedermann and Salzburg native Verena Altenberger as his lover, Buhlschaft.

From one stage to another

Anyone that doesn’t live in Salzburg or the surrounding area and also wants to carry on enjoying the spectacle in their own time and space should try booking a room in a very special boutique hotel: the Hotel Goldgasse.

Tucked away in a historic alley of the same name in the old town, this hotel sets itself apart from the rest with its modern themed rooms set within a building that’s around 700 years old. It’s the only “Small Luxury Hotel” in Salzburg, and shows its dedication to the festival and the arts through its distinctive interior design concept – there’s surely no more authentic place to stay in the city.

No wonder each of the 16 rooms is so fervently coveted, especially during the festival. The city’s hotels are pretty much all booked up at this time, but the Hotel Goldgasse is a particular favourite – only here does the unique atmosphere and wonder of the cultural festival accompany you back to your own hotel room. With largeformat photo wallpaper, we come face to face with scenes from previous performances and their stories: from Peer Gynt to La Bohème, each depicted in an individual way. But the hotel’s interior design doesn’t just stand out for its cultural and artistic showcase – it is also impressive in the way it skilfully combines the old and the new.

Hungry for more at Hotel Goldgasse

The Hotel Goldgasse will also spoil discerning visitors to the festival (and those who would like to go in the future) with exquisite cuisine. The hotel’s own restaurant, Gasthof Goldgasse, is one of the best in the city, and provides a premium pub-like experience unlike any other you could wish to find. In a tasteful setting, we enjoy an exceptional meal and outstanding service. The location is best known across Salzburg for its fried chicken served in a copper pot, for which only the best corn-fed chickens are prepared according to a recipe dating back to the baroque period. Guests from out of town enjoy ordering the legendary, fluffy and light “Salzburger Nockerl” baked soufflé, which the chef serves with home- made vanilla ice cream and a fruity berry compote.

And so a culturally enriching day at the festival also becomes unforgettable from a gastronomic point of view and, once back in our room, we bask in our memories of a unique summer at the festival in the beautiful city of Salzburg.