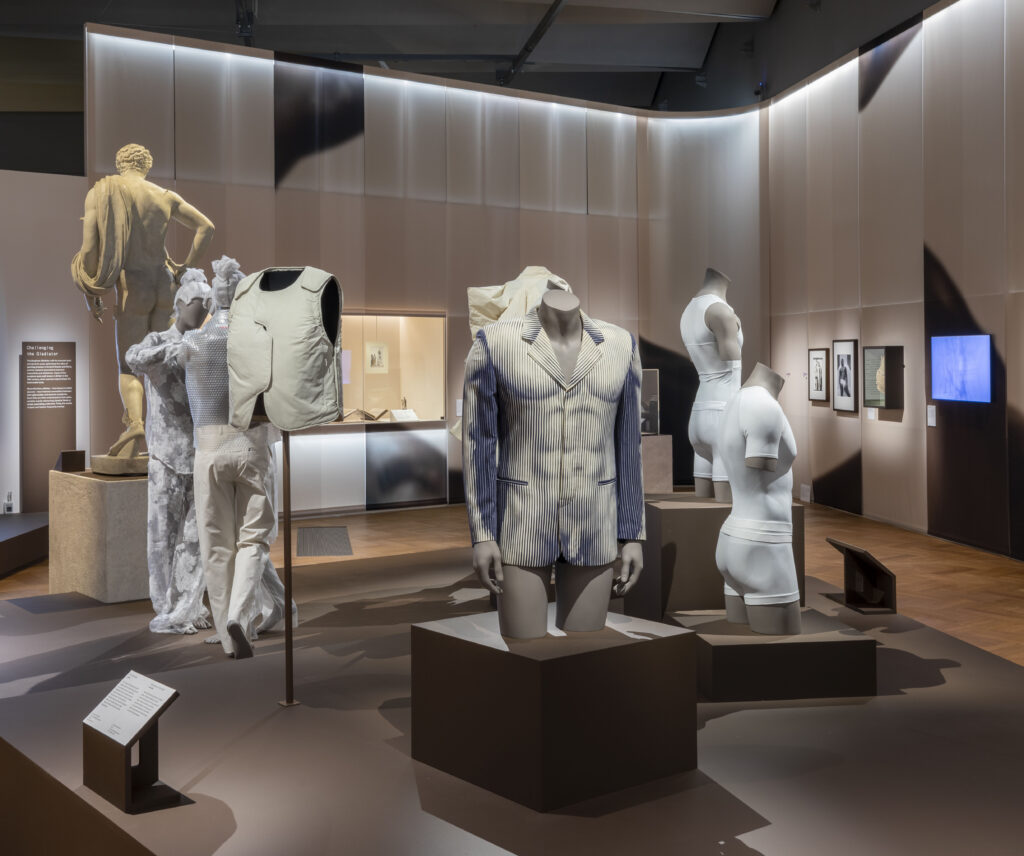 Fashioning Masculinities: The Art of Menswear is the first major V&A exhibition to celebrate the power, artistry and diversity of masculine attire and appearance. The show traces how menswear has been fashioned and refashioned over the centuries, and how designers, tailors and artists – and their clients and sitters – have constructed and performed masculinity, and unpicked it at the seams.

Billy Porter’s tuxedo gown by Christian Siriano created a sensation on the Oscars red carpet in 2019. In 2020, an Alessandro Michele for Gucci custom gown and tailored jacket was worn by Harry Styles as the first solo male cover star of US Vogue. In 2021, Bimini Bon Boulash wore a wedding dress by Ella Lynch for the season 2 finale of Ru Paul’s Drag Race UK. All three ensembles are on display in a UK museum for the first time. Joining the gowns in the finale is a dynamic and celebratory film directed, animated, and illustrated by Quentin Jones. Produced by Cadence Films, it is a culmination of the themes explored in the exhibition – featuring dancing figures projected across a 5-metre-high by 12-metre-wide curved wall.

The exhibition Fashioning Masculinities: The Art of Menswear presents around 100 looks and 100 artworks, displayed thematically across three galleries and the finale. Contemporary looks by legendary designers and rising stars are displayed alongside historical treasures from the V&A’s collections and landmark loans: classical sculptures, Renaissance paintings, iconic photographs, and powerful film and performance.

From looks by Gucci, Harris Reed, Grace Wales Bonner and Raf Simons, to paintings by Sofonisba Anguissola, Kehinde Wiley and Joshua Reynolds, contemporary artworks by Robert Longo, Omar Victor Diop and Yinka Shonibare CBE, to an extract from an all-male dance performance by Matthew Bourne’s New Adventures, the exhibition showcases the variety of possible masculinities across the centuries from the Renaissance to the global contemporary. Outfits worn by familiar faces are interspersed throughout, from Timothée Chalamet and Sam Smith, to David Bowie and Marlene Dietrich. Innovative creations and diverse representations highlight and celebrate the multiplicities of masculine sartorial self-expression, dressing beyond the binary.

Claire Wilcox and Rosalind McKever, co-curators of Fashioning Masculinities: The Art of Menswear, said: “Masculine fashion is enjoying a period of unprecedented creativity. It has long been a powerful mechanism for encouraging conformity or expressing individuality. Rather than a linear or definitive history, this is a journey across time and gender. The exhibition brings together historical and contemporary looks with art that reveals how masculinity has been performed. This is a celebration of the masculine wardrobe, and everyone is invited to join in.”