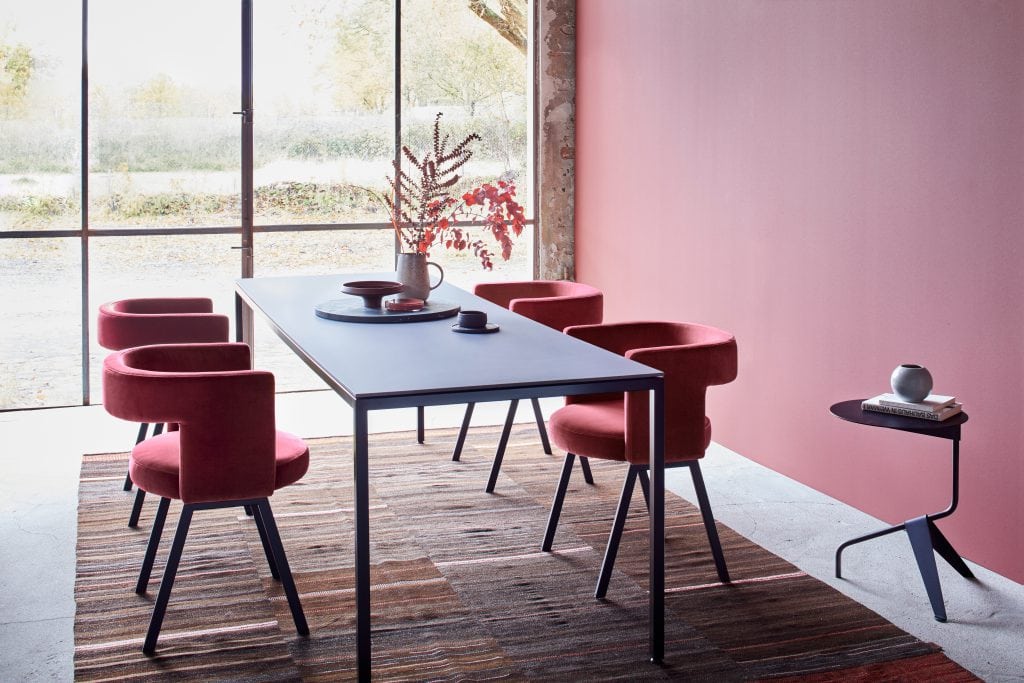 Individuality of sitting – Martin Hirth revamps his D8P as a dining chair in good Bauhaus tradition.

In the civilised world, we spend most of our day sitting. So, when whiling away the evening with friends at the dining table, there’s one thing you need most of all: a comfortable seat. It’s all in the details: Martin Hirth has now given his D8P, a comfortable dining chair, a new velvet outfit.

At the same time, he has added qualities that are normally the hallmarks of true companions: furniture you don’t want to get up from.

In the summer of 2017, Hirth started developing his chair that would be the answer to the quest for a comfortable upholstered dining chair. At the same time Hirth wanted to pay homage to the concept of the cantilever armrest – a hallmark of Walter Gropius’ F51.

For me, the F51 embodies the very essence of Bauhaus furniture. I wanted to translate its silhouette and charisma into a plain chair. Therefore, the chair design consists almost exclusively out of basic geometric shapes,

Hirth has now taken the D8P a step further in the best Bauhaus tradition. He has given it a makeover, reinforcing the ergonomics of sitting with an adapted backrest and a new outfit.

Today, its comfortable upholstery cradles the user in a velvet seat for metropolitan flair and hard-wearing properties. The D8P serves as a comfortable dining chair both at home and in a restaurant setting. It straddles the line between minimalism and opulence.

And it boasts another hallmark of the Bauhaus – the ability to make a lasting visual impact. This is what makes the D8P a product that will last for a long time and not just a short-lived fad,

Martin Hirth was born in Horb in the Black Forest in 1987 and later moved to Offenbach/Main to study product design at the Hochschule für Gestaltung. While studying, Hirth already worked as a freelance designer and assistant to Sebastian Herkner. After numerous awards and exhibitions at the industry’s most important fairs, he graduated in 2014. Since then Hirth has been designing products for well-known international brands. His products stand out for their formal lightness and conceptual rigour. They are charming and, not least, of a lasting nature – both on a visual and material level.