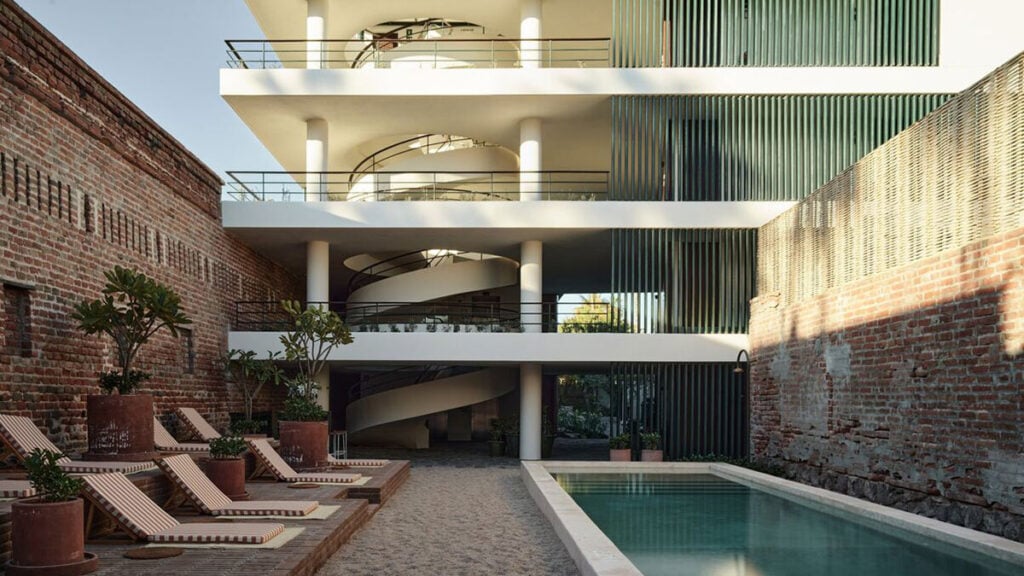 The Baja Club Hotel in La Paz, Mexico, shows that conversions are also possible in the hotel sector. A historic colonial hacienda has been transformed into a boutique hotel in its second life. Here, colonial club flair meets modernist design language.

The Gulf of California is home to an exceptionally large number of rare animal and plant species. Not for nothing did marine biologist Jacques-Yves Cousteau once call this ecoregion “the aquarium of the world”. A diversity that is threatened by increasing overfishing and illegal hotel castles, as environmental organisations have been warning for decades. A new hotel has now opened on the coastal promenade of La Paz in Baja California. Instead of sealing more land, hotel operators Carlos Couturier and Moisés Micha of Grupo Habita opted for the adaptive conversion of a classic hacienda.

The villa, built around 1910 in mission style, belonged to the Cornejo family who lived here and earned their money from pearl fishing. This architectural jewel in the historic centre of La Paz, Mexico was to be converted and expanded into a boutique hotel with 32 guest rooms. A careful treatment of the historic building was just as important as a successful combination of old and new.

The environment and local traditions are the heartbeat of our projects.

Instead of letting the old and the new merge into each other without any thresholds, Max von Werz staged this connection with a sophisticated torque. A circular staircase made of concrete spirals up between the old and the new wing and thus opens up the four floors of the extension. The sculptural staircase is reminiscent of the formal language of Oscar Niemeyer and Le Corbusier.

This modernist jargon is spoken by the entire new building, which rises in steps towards the rear and thus does not tower above the low cubature of the original house on the street side.

Nautical style elements such as the continuous railing on the terraces and the wood-panelled partitions sometimes make you think of a stranded steamer – a thoroughly popular motif of New Construction. The greens and reds inside the hotel are traditional colours found in Mexican craftsmanship.

Here, as in previous projects, the hotel developers have made it their mission to incorporate the character of the place into the project. “With every hotel we build, we use a local team – the environment and its local traditions are the heartbeat of our projects,” says Carlos Couturier.

The rooms and suites have terrazzo floors and traditional Talavera ceramic lamps. The Parisian interior duo of JAUNE have designed their own series of chairs for the hotel, made of wood and woven willow and crafted by Mexican artist Claudia Fernández.

Concerning the design of the Baja Club Hotel, the architects focused on bioclimatic design. This involves using natural resources such as vegetation, wind and passive solar energy to optimise a building. The aim is to create thermally efficient buildings through local climatic and environmental conditions, thus also contributing to environmental sustainability.

One of the objectives in implementing the new hotel was to preserve the microclimate in the courtyard through the lush garden. The property’s historic pergola was restored and serves as a well-shaded outdoor terrace for the restaurant. The wind El Norte is known for is best enjoyed in the rooftop bar. This is called a bioclimatic sundowner.