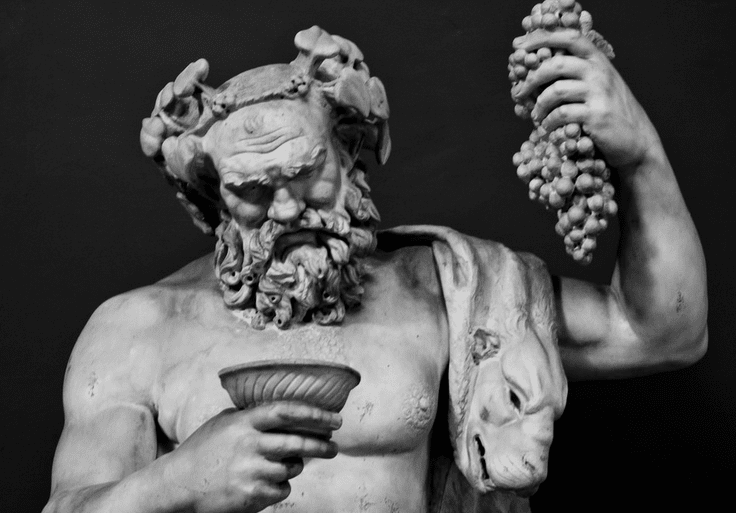 Dear Sir, let me begin by telling you that you look ridiculous.

Lounging around half-naked with vine tendrils in your hair and a floozy on your arm, you look like a pimp who’s walked through a hedge backwards. But if that is what you want, who am I to stop you. Keep on grinning like a madman; the smile will be wiped off your face soon enough. But I digress. I, Pancras Sobriety, accountant, led a life of abstinence and in strict accordance with sensible, prudent limits – until I was forced to make your acquaintance, or rather the acquaintance of the product that you advertise. And it all started so innocently.

The staff at our company organised an outing. Usually, I would shun such activities and devote myself instead to my books. On this occasion, however, I had great difficulty in withstanding the urging of my superior, a man by the name of Fidelio Meier. When Miss Lacrimosa, who holds the reins of our secretariat, announced that “Sobriety is joining us”, I was all but compelled to attend. I should perhaps mention here that the young lady has considerable charm.

The excursion was to be an opportunity to explore the beautiful countryside of the Wachau. And so it proved to be. The weather was delightful, as was the picture presented by our party. As we proceeded on our constitutional, I had no inkling of the impending disaster. On the contrary, I enjoyed the view of the vineyards. Carefully strung wires, as regular as a balance sheet, and sophisticated irrigation systems. Our guides explained that the herbs growing on the ground gave the beverage a particular quality. The blooming rosebushes at the ends of the rows of vines were not merely pleasant to look at, but also useful, as they gave an indication of any mildew. As I said, everything was completely innocent. It was not until we arrived in a wine cellar that I should have smelt the rat lurking in those barrels, for it was simply impossible to refuse the samples offered.

I should stress that the beverage by no means reminded me of elder or apple with a light citrus note, but in fact of vinegar. Only a short time later, my mathematical self was, as they say, one over the eight. You are the one responsible for this, sir. I am by nature a reserved man, but Sodom and Gomorra were a picnic compared to what happened on this excursion. Nothing but excess! If one is to believe the reports, I danced half-naked on the table. People are familiar with my proverbial taciturnity. Yet under the influence of this wine, I forgot myself. Apparently, I entertained the assembled company, gave Fidelio Meier a piece of my mind and wrested a promise of marriage from Miss Lacrimosa.

All this was your fault, Mr Bacchus. My life is ruined; I am floundering and all boundaries have blurred. I have fallen victim to wine. But let me tell you one thing: I shall not end like you, or at least not immediately. True, my boss has promoted me, I am suddenly popular with my colleagues and Lacrimosa likes me, but if you imagine for a minute that we are therefore going to name the child she is carrying after you, you are quite mistaken. That is the truth of which you are doubtless aware, as that truth lies in you, in vino veritas.