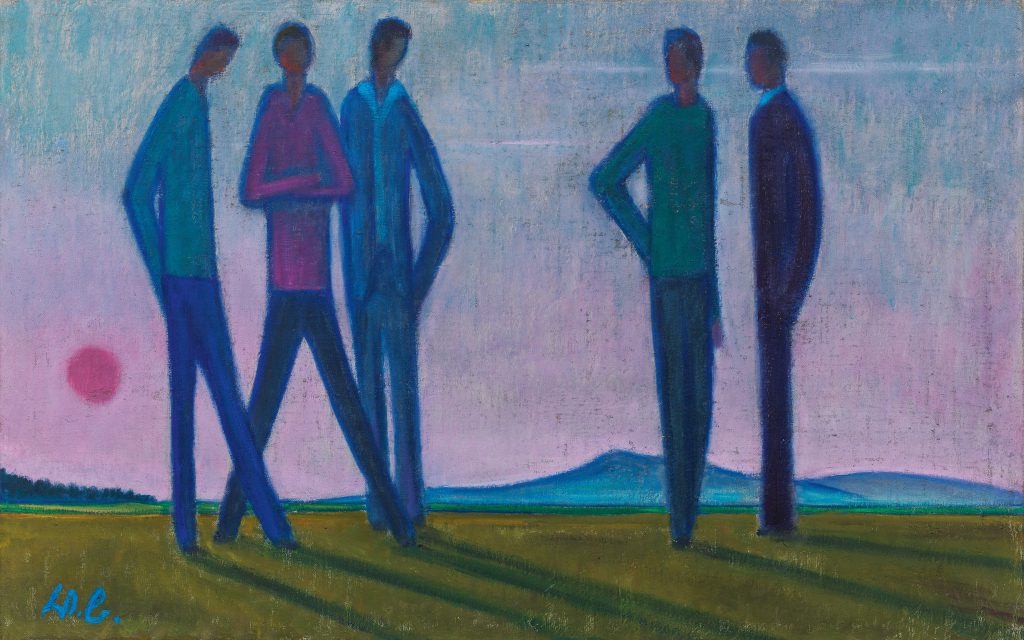 With a selling price of (KP) von €249.600 (hammer price €195.000), “The Skittle Player” by Werner Berg became the top lot of the march auction. The “german carinthian” painter is holding his high price level.

Werner Berg was born on April 11th 1904 in Elberfeld (Wuppertal) in Germany, and died on September 7th 1981 in Carinthia.

Berg studied from 1927-1929 at the Academy of Fine Arts in Vienna; in 1931 he moved together with his wife Amalie to the Rutarhof, a farm on the Carinthian mountains where he lived unto his death. Life there was difficult and stinted, there was no electricity or running water up to the 1960-ies. The couple had decided that the farming should support Berg’s artistic work and make him independent from the art market; this however was only to be achieved through hard work.

Berg, his wife and later their five children led exactly the simple and somewhat primitive daily farm life that the artist used so often as a motive and which is mirrored in the reduced style of his paintings.

These were not to the National Socialists liking; one of Berg’s works was even included in the “Entartete Kunst” (degenerate art) show in 1939. After the war, during which he was sent to Scandinavia as a landscape painter, Berg returned to the Rutarhof and chronicled the changes in the archaic, small rural world, due to the industrial revolution.

Berg gathered his most important experiences as an artist not through other artists positions or movements, but in the debate with himself and the world of country living. In his paintings, the existential is always present…

Although Berg did receive guests on his Rutarhof (like a young Maria Lassnig with her companion Arnulf Rainer in the late 40-ies or the writer Thomas Bernhard), his friendships did usually not last long. He fought with Emil Nolde and especially with Herbert Böckl, which made his reception in Vienna difficult.

A love affair with the Carinthian poet Christine Lavant in the early 50-ies put a huge strain on his marriage, after the end of the affair Berg tried to commit suicide and was hospitalized for many months. This led however to a new work phase, and the recognition of his art; his sales soared, which at last alleviated the difficult economic situation on the Rutarhof.

The chronicler of the rural population

His themes remained those of a chronicler of the rural people. Farmers, fair visitors, church goers, curlers, bus travelers, people waiting at stations and of course skittles players are recurrent motives. Berg’s art was about formal reduction and simplicity in the construction of his paintings; order and structure, rigor, but infused with a certain calm undertone and harmony. (see Hans-Peter Wipplinger, introduction, in catalogue for the exhibition Werner Berg’s 100. Birthday p. 6, Hg Franz Smola, Edition Johannes Heym, Klagenfurt 2015.).

Berg is also well known for his woodcuts, which perfectly illustrate his principles of two-dimensional depiction. The writer Thomas Bernhard remarked: “Werner Berg has been achieving excellency regarding the modern woodcut in the past decades, he can be seen as trailblazer with an Austrian abstract element und is an artist of European standing.” (in Website Werner Berg Museum, http://www.wernerberg.museum/de/biographie/1953-1961/)

In this painting, „The Skittle Players”, Berg is again watching the people in his vicinity; there was a lot of skittle playing going on during holidays. The artist is drawn to the seriousness of the statue-like players, it happened often that high sums were lost during the game. In his first paintings with this motive, there is one of the figures moving forward ready to strike, but in his last, more reduced pictures, he dismisses even this outer impulse.

The skittles players in this picture stood on a dam atop the street (next to the Edelbauer Inn in Elnersdorf near Bleiburg, Carinthia) from where Berg is watching them. The horizon is  low, with a mountain silhouette in view. The sinking sun is throwing long shadows and imparts the figures with monumental dimensions.

The theme of their resigned loneliness resonates in a foundering world. With the sum of his life experience and at the height of his art, Werner Berg describes his own existential situation. (see Harald Scheicher in auction catalogue im Kinsky, Auction 4. März 2020, Edition Auktionshaus im Kinsky GmbH).