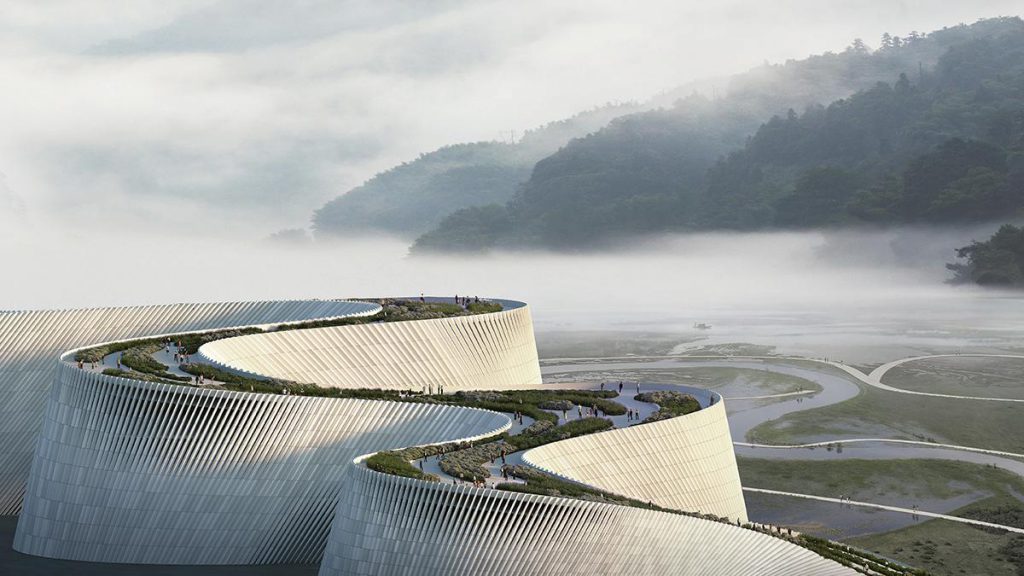 There is always a buzz of interest when leading design city Shenzhen announces a new project: over 70 architectural firms from all over the world submitted designs for the new Shenzhen Natural History Museum in China. In the end, the 3XN team was awarded the contract for their truly spectacular design.

Built on the Pearl River, Shenzhen is one of the fastest-growing cities in the world, with major projects sprouting up like mushrooms. As a member of the UNESCO Creative Cities Network, the southern Chinese city is no stranger to innovative design, meaning that any competition attracts enormous interest. Top international architects like Ole Scheeren are eager to have their ideas brought to life here. All eyes will soon be on buildings like MRDV’s stacked terraces or Zaha Hadid Architects’ OPPO headquarters. And now, Danish office 3XN is creating a Natural History Museum with a wholly unique design.

Over 70 designs competed for the museum project at picturesque Yanzi Lake in the Pingshan district of Shenzhen, with 15 teams from North America, Asia and Europe making it to the shortlist. First place was recently awarded to 3XN, which had joined forces with B+H and Zhubo Design. It was an important decision for the jury. After all, the new building will not only be southern China’s first all-encompassing natural museum, but will also be counted among the “ten cultural facilities of the new era”, with which Shenzhen aims to rectify a particular shortcoming: even though it is one of the most populous cities in China, Shenzhen has far fewer cultural institutions than its counterparts.

As a cultural showcase project, the new museum must naturally be nothing short of spectacular. 3XN’s design does not disappoint on this score. The winning design, Delta, is enthroned in the river delta as if it had grown there naturally. A public park will be situated on the roof of the building, which covers over 42,000 square metres.

The shape of the museum is anything but conventional too:  the building winds its way through the landscape like an elevated river. And each of its curves opens up different views of the surrounding park, hills and lake.

Like water streaming down a river, the wave shape leads guests to a cavernous passage. This area connects with the museum lobby and contains cafés and other places for people to come together. A vibrant area that will be the “pulsating heart” of the new cultural building in future.

The design expands Shenzhen’s network of public parks. The architects are aiming to make the lush green spaces accessible throughout – the idea is for the entire grounds to be filled with life around the clock. Early risers will find ideal conditions for jogging and walkers can stroll through the grounds even late in the evening. Residents and visitors alike will be invited to enjoy the nature on display. And not only in but also around the new museum.

This monumental building was commissioned by the city administration’s Engineering Design Management Centre. And Shenzhen’s plans for the building interior sound exciting as well: a museum devoted to interpreting the laws of natural evolution. Shenzhen’s geography and ecology are to be shown from a global perspective. Active scientific work is also planned. What the city planners essentially have in mind is a world-class science museum.

Which, it hardly needs to be said, will cost a pretty penny. The latest estimates are in the region of 3.5 billion yuans (€440 million). However, this does not yet include the cost of the exhibits that will be showcased throughout the 40,000-plus square metres of exhibition space.

But for the architecture competition jury, the future exhibits of the museum took a back seat initially. Australian architect and studio founder Philip Cox was impressed most of all by the sheer creativity of the winning design.

The continuously sloping exterior wall with the landscape roof creates a continuous volume and spatial experience. The form of the cliff is very interesting, and the details are handled well. The layout of the museum and its interaction with ramps and walls create interesting spaces.

The jury had particular praise for how the design was woven seamlessly into the landscape. The building dovetails perfectly with Shenzhen’s Yanzi Lake Park.

This building captures the unique atmosphere of a riverfront site and finds the timeless property of water as a concept.

Incidentally, the winning team itself also successfully “connects” the expertise of three worlds: 3XN’s headquarters is in Denmark, B+H Architects are based in Canada and Zhubo Designs in China.

The museum’s elegant sweep and green roof can almost be said to be typical of prizewinning firm 3XN. Its other projects – the Olympic House, Sydney’s new Fish Market and the Kvarter 15 office building in Stockholm – also exhibit similar elements.

So there is no doubt that Shenzhen will have a building that will bring it the same degree of international acclaim.