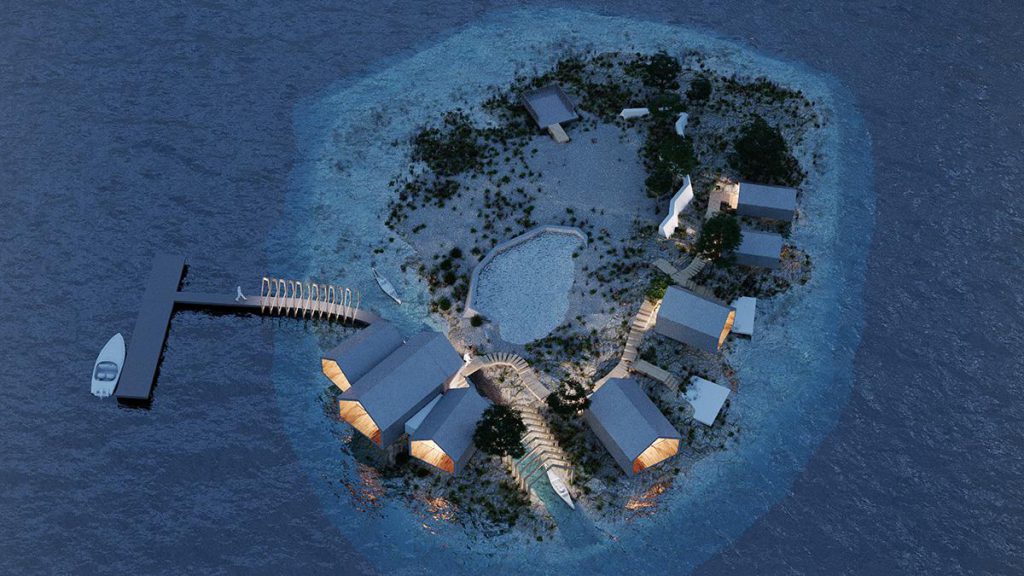 The small piece of rock just off New York City has a dark history that has earned it the name Rat Island. But now the private island is to play host to a sustainable luxury resort.

Although it doesn’t have a name, the majestic bird is well known to most New Yorkers. After all, the great blue heron is the only inhabitant of Rat Island, a small rocky enclave just off the shores of New York City. Rat Island is the only privately owned island in New York. It measures just one hectare and has neither water nor electricity. It is not clear where the name comes from.

Time for Rat Island to shine

However, according to Alex Schibli, the current owner of this unconventional piece of land, this is all set to change very soon. Together with New York architect Pablo Jendretzki, he aims to use the unique island as the site for an equally unique hotel.

Let’s first take a closer look at this seemingly unspectacular lump of rock and its memorable name, Rat Island. Measuring a little over a hectare and jutting out of the water in full view of New York City, the island consists for the most part of schist bedrock. In reality, it is the smallest fragment of those 44 islands upon which New York is built.

Purple beach with an aftertaste

On its southern side is a small channel that cuts into the bedrock and has always been used for docking small boats. The shimmering purple beach on the western side looks inviting at first glance. On closer inspection, however, the source of the unusual colour reveals itself as a mixture of clam shells, rotting bird bones and scrubby reeds.

Why is it called “Rat Island”?

Nonetheless, there are plenty of stories surrounding this tiny island. Quick recap: it served as a quarantine centre during the wave of typhoid fever in the 19th century. Up to 40 infected people are said to have been brought there. And, it is to be presumed, met their end there as well. All that remains of the hastily built shacks are a few foundation walls, nothing more. However, it is possible that the island’s name comes from the rats that lived there together with the typhoid fever victims.

Another story has it that the island was used as a stopover by escapees from the nearby Hart Island prison. This was to allow them to rest briefly before swimming on to City Island. As, charmingly enough, prisoners at the time were dubbed “rats”, the name of the island could also be a nod to them and their kind.

Since 2011, the island has belonged to Alex Schibli, a Swiss national living on City Island. A former Port Authority engineer, he outbid seven other interested parties and acquired the unused area for 160,000 dollars. Now 80 years of age, he wants to unshackle the piece of rock from its dark history. And, at the same time, to open it up to New Yorkers as a place of recreation.

To begin with, I didn’t have any major plans – I just saw it as a quiet place to picnic with my girlfriend.

But then he was contacted by architect Pablo Jendretzki: “He told me he had an idea for the island.”

Jendretzki had long been fascinated by Rat Island and had already toyed with the notion of building a state-of-the-art hotel project there.

The idea that one could retire for a weekend or a month to a private cabin on a small island just 30 minutes away from Central Park has always fascinated me.

In any case, he succeeded in winning over the new owner with his idea. Since then, the pair have been tinkering away at their vision of an eco-hotel in a glamorous setting.

As Rat Island has no natural resources of its own, the planned ten wooden cabins need to be self-sufficient. This means that electricity can only be generated directly and on-site and that rainwater must be collected and purified. Jendretzki: “We are studying the latest technologies for solar and wind power, rainwater collection and purification, as well as contained treatment systems for effluent”. Large-scale projects such as the new Google headquarters or Bloomberg’s London headquarters might well serve as a model for this.

We designed the cabins without windows on the side to provide privacy.

While there are still questions regarding its self-sufficiency, the architectural concept is already complete: since the rocky terrain is not conducive for building, all components and objects must be produced on the mainland and then installed on the island at a later stage. This means that the anchoring system and the essential columns and girders are the focal point of the project.

The residential units themselves are to be produced with a minimum carbon footprint, each one offering a place for stressed-out New Yorkers to retreat to. Pablo Jendretzki: “We designed the cabins without windows on the side to provide privacy.” At the same time, there will be large windows to provide a spectacular view of the water and the Big Apple.

Also planned is a small marina with a floating pier system for twelve boats and a possible docking platform for the New York Water Taxi. The old channel that cuts into the island has been integrated into the concept as a possible access for small boats and canoes.

All that is missing now is the necessary cash. Alex Schibli does not have the funds to finance the project alone and is currently on the lookout for investors.

However, before well-heeled holidaymakers take the place of the resident great blue heron, Schibli is anxious to rid the rocky enclave of its sordid name.

Which is why Rat Island is soon to be rechristened Malina Island. After Alex Schibli’s beloved granddaughter.