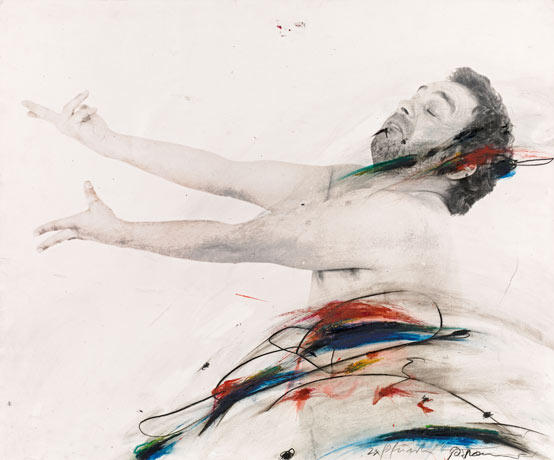 The im Kinsky post auction sale offers you an exciting view on male portraits throughout history. There are wise men, army men, men who use their bodies as an object to create art, and eventually epic heroes. We take you through a fascinating trip through the history of art.

Looking through the old master’s section, the portrait of a philosopher immediately calls the viewers’ attention. Rembrandt himself studied Philosophy in Leiden to pursue and deepen his knowledge about ancient art. This painting shows an old savant in his chair. The light from the upper right hand side draws the attention to his wrinkled face, his white beard and aged hands. Through his admirable direction of light, the artist manages a very effective dramatization of the scene and a psychologically sound interpretation of fugacity and eternity.

More than 300 years on, Anton Faistauer created this portrait of Karl Höller, the son of a well-known Salzburg family, in his uniform after WW1. It shows the influence that studying old masters like Tizian and Tintoretto had on the painter in its deep, lush and warm colors. He repeats a beloved composition by masters of the Renaissance: to the left, there is the opening of a small window which draws the eye to a wide landscape. This often has a correlation to the depicted person, for instance by showing his realm. In this case, it could reflect the fortress Hohensalzburg. To the right, a gathered curtain of precious red fabric marks the background, which also is a well-known element of style in the paintings of the Baroque and Renaissance. With this work, Anton Faistauer proves himself to be a worthy follower of the most renowned portraitists in the history of art.

The body as a means of reflection

Arnulf Rainer’s Body Poses were created only about 50 years later; here, the artist uses his body as means to transport his artistic message. First came his grimacing self-portraits in the form of passport pictures, then he started to work on enlarged photoprints, which he drew on, then corrected and accentuated them. These so called „Fotoséancen “, made between 1969 and 1976 in cooperation with a number of photographers, led to self-portrayals intended for further enhancement. The delicacy and aggression of gesture, the astonishing choice of color and its combination, the complex denseness and the assured handling of only a few lines morph the photography into an expressive, ambiguous emotion. The series of reworked photographic self-portrayals is one of Rainer’s most important group of works.

A self portrait of a very different kind is the one by Otto Mühl from 1981. At this time, Mühl was at the height of his power as the uncontested and omnipotent leader of the community Friedrichshof, in which up to 600 people lived at the time. He looks at the viewer in an accordingly confident way.

The view that the German painter Markus Lüpertz takes on men is a very different one. Six heads in a subdued palette of colors take up the space in his oversized canvas. There are no individual facial features to be disguised, only the schematic outlines of a number of heads, whose impression is rather sad and dismal. This work is part of a one of the best known series of this painter: “Men without women – Parsifal”. Between the years 1993-1997 Markus Lüpertz worked on a single theme, which centers around the hero Parsifal from Richard Wagner’s last opera. It speaks of the redemption from everlasting temptation, and of a world dominated by male phantasies. The series “Men without women – Parsifal” from which this picture originates, challenges the viewer with its mysterious content; and also offers many different possibilities for interpretation.