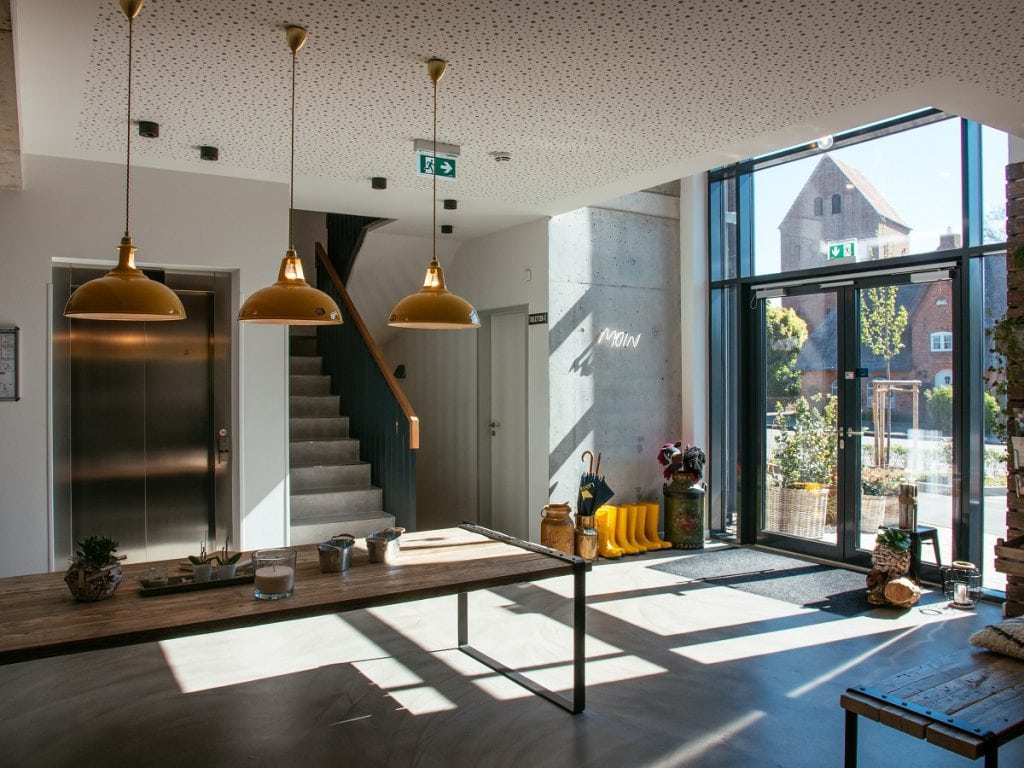 Holidaying in North Frisia means endless vistas, undisturbed nature and of course the North Sea. So much open space and blissful tranquillity. This northern point of Germany is a haven for relaxation and home to the most stunning retreat – the Hotel Landhafen in Niebüll.

We’re welcomed with “Moin” when we enter Hotel Landhafen, a typical greeting in this part of Germany. We’ve arrived at Niebüll in North Frisia on our first holiday in this tiny corner of the world, and such a warm greeting makes us feel immediately at ease. There’s a relaxed, friendly atmosphere in North Frisia, and we like it.

We’re also big fans of the lobby in the hotel, or the “Stube”, as we find out it’s called – essentially an extended lounge that blends the functionality of the lobby with the intimate feel of someone’s living room. Yet another feature unique to North Frisia, and demonstrative of the overall concept of the hotel. Hotel manager Christoph Brunk and his wife created the hotel in such a way that it feels like a traditional North Frisian home, only a bit more special.

The building pays homage to a typical farmhouse, with interior design that combines elements of both an old country house and modern industrial chic. Breakfast is also served in the lounge and consists exclusively of regional produce, while in the bar and restaurant, locals mix with guests from all over the world to have a chat.

Everything here is authentically North Frisian, from the name of the hotel to the toilet paper folded into the shape of a ship,

explains Christoph Brunk with a laugh.

The garden, a harbour for the soul

We’re curious. “So what is a ‘Landhafen’?” we ask (this would be a “land harbour” in English ­– a rather odd concept). “The name has a special meaning. Many, many years ago, there was a harbour where our beautiful orchard is now, as the sea came right in to here. The North Frisians then pushed the sea out further and further to the point where it is now through land reclamation, and that’s why there is something of a ‘Landhafen’, or ‘land harbour’, in our garden,” explains the hotel manager.

Above all else, the over 100-year-old garden that stretches out before us is a harbour for the soul, with the view that hints at the proximity to the sea, the lovely old fruit trees and the sunlight that warms the hotel terrace until late into the evening. The little lake and the section of beach – everything invites you to listen to your soul and to soak up all that nature has to offer. Also in the garden are two old huts from the beach at Dagebüll. (Side note: that’s the place to go if you want to be by the sea.) In the hotel garden, the huts fulfil an entirely new purpose: one as a “man cave”, a men-only zone where you can play darts and drink whiskey, the other as an artist’s retreat, where you can let your creative juices flow.

Anyone wanting to spread their wings a bit can hop on a bike and ride the mere 20 minutes to the Danish border, or to the ferry that will take you to the North Sea islands and the most stunning beaches in Germany.

Back to the living room, or rather the hotel’s amenities. Several small nooks, the wellness area and the yoga room encourage you to switch off and consider the hotel a mini retreat. The rooms and suites are styled in the industrial country house look and the beds are unbelievably comfortable. There is enough space for families and dogs, and there are accessible rooms available. And what to say about the sunsets… Best viewed from the garden, they really are something quite spectacular way up there in the north.