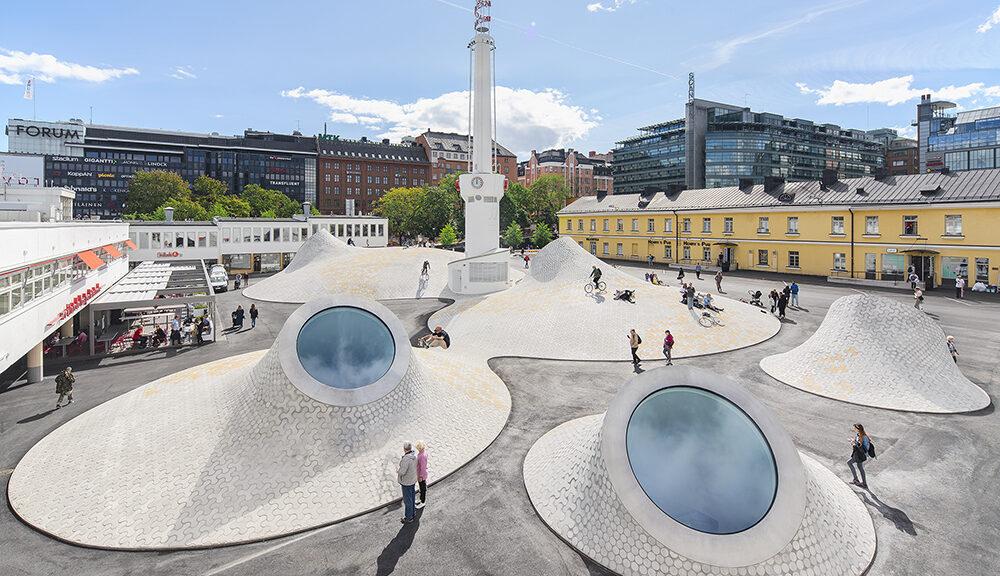 Play area and social meeting place on top, cultural institution down below: Helsinki’s Amos Rex art museum is an extraordinary building that has scooped up multiple architectural awards.

Where on earth can you find an art museum with a roof where children can run, climb and cycle over its domes? In Helsinki! Right in the heart of the Finnish capital. Or, to be more precise, at Lasipalatsi (“Glass Palace”) Square on Mannerheimintie boulevard. This is where the new Amos Rex can be found.

It is unquestionably a unique kind of building:
play area and popular meeting place up top, cultural institution down below.

The “above-ground” roof façade of the museum, which opened its doors in 2018, is at street level, while the exhibition rooms are underground.

It is no surprise to learn that the building, the brainchild of high-profile Finnish studio JKMM, was an immediate hit on Instagram. Or that Amos Rex has already received several awards. A recent addition to these was the “Oscar” of the museum world – the coveted LCD Award as the “New Cultural Destination of the Year (Europe)”. Not to mention that the IIDA singled it out not only as one of the six winners of the 47th Interior Design Competition, but also as the “Best of Competition”.

The way is also clear for an AIT Award 2020 for “Best in Interior and Architecture” (category: Public Buildings/Culture). Amos Rex has already secured its place among the finalists for the award, which is to be presented on 30 September. And it is not difficult to see why. Or why the BBC singled it out in 2018 as one of the year’s most innovative new works of architecture.

A roof at ground level

The roof domes of various sizes that rise up out of the ground at street level look like something out of a science fiction movie. At the top of each of these is a round window that lets abundant daylight into the museum rooms below.

By housing the exhibition space underground, the architects deftly overcame one hurdle: namely that existing provisions for protecting historic sites specify that new buildings cannot reduce the amount of public space available there.

Through the large skylights, you can see down into the museum halls from the public square – and vice versa. In this way, the expansive cultural institution (6,230 m²) has been integrated into city life even though it is located beneath people’s feet.

The entrance to Amos Rex is found in Lasipalatsi, the iconic “Glass Palace” built in 1936 in a functionalistic style with rows of high windows. The building is home to restaurants, shops and the lovingly modernised Bio Rex Cinema, where all kinds of cultural events are held.

Hotspot for fun and city culture

Integrating one of Finland’s architecturally pioneering 1930s buildings – Lasipalatsi – as part of the Amos Rex project has been a moving experience.

By adding a new level to this special site, the team of architects feel that they are connecting past with present.

We would like this to come across as a seamless extension as well as an exciting museum space. We would like the new Lasipalatsi Square, with its gently curving ceiling domes, to be received as a welcome addition to Helsinki’s urban culture. A place everyone and anyone in the city can feel is their own.

JKMM did not take any easy options, choosing instead to develop and fine-tune the final concept together with the city planners. The aim was to preserve Lasipalatsi Square as an important public space. And for the people of Helsinki to be able to enjoy the only visible element of the new Amos Rex – its roofscape.

Park landscape on the roof

The solution revealed itself in the form of sculptural skylights that create a new topography. Their gently rolling forms are based on the idea of a city park that invites people to play and interact with one another.

For visitors to the below-ground gallery rooms, the large skylights with steel frame concrete structures are a source of light, a design element and a window to the area above the ground. The architects were anxious to convey a sense of the local district inside Amos Rex even though the museum is six metres below the ground.

JKMM enlisted interior architect Petri Vainio from Finnish studio Doctor Design to bring the fascinating light concept to life. The roof construction was completed in cooperation with specialists from Sweco Structures. At the same time, the striking skylights open up an architectural innovation that does the museum a great service.

The innovative concept meant that a column-free exhibition hall measuring 2,200 square metres could be built. One that can be changed flexibly to suit each individual exhibition.

The ceiling domes, historical associations and sheer size of the hall lend themselves to impressive scenarios. The subtle lighting from above makes visitors to the Amos Rex hall feel almost as though they are under the nave of a cathedral.

Inside the museum, a stairway leads from the exhibition hall to Lasipalatsi’s foyer. This creates a harmonious connection between the new and the existing buildings.

Amos Rex and “its” cinema

The JKMM team also had a hand in the old part of the building: the 550-seat cinema auditorium was restored together with the rest of the listed Lasipalatsi Pavilion. Both arthouse and mainstream films are shown here. The cinema is operated by cultural workshop Korjaamo, which also organises film festivals and other events in cooperation with Amos Rex.

Together with the Lasipalatsi Pavilion, the museum complex covers an area of just over 13,000 square metres. Helsinki residents and visitors from all over the world fell in love with Amos Rex right away.

The exciting project also rid the City of Helsinki of one particular problem. Originally conceived as a temporary building for the 1940 Summer Olympics (postponed until 1952 owing to the Second World War), Lasipalatsi had become a drain on city finances.

The complex was in danger of falling into disrepair in the 1980s. But then it was granted the status of a modernistic masterpiece.

From Amos Anderson to Amos Rex

The City’s cooperation with the foundation of the privately owned Amos Rex – or, as it had been known since 1965, the Amos Anderson Art Museum – came at just the right time. The collection housed in the private residence of publisher and art patron Amos Anderson (1878-1961) was bursting at the seams. Over 100 years old, the building was no longer up to the task of showcasing 19th and 20th century Finnish art in its full glory. However, Lasipalatsi’s central location and surroundings were perfect for a new museum building.

After all, the spectacular, state-of-the-art Amos Rex is in illustrious company. Just a few steps away is Kiasma, Finland’s leading museum of contemporary art. The neo-classical Ateneum museum of fine art is also close at hand. As is the Tennispalatsi, built in 1938, which houses the Helsinki Art Museum (HAM) and art gallery.

Amos Rex has not only succeeded in breathing new life into Lasipalatsi and its surroundings – its two-level design is also a new flagship project for Finnish architects, demonstrating to the world the heights that they can achieve. A project that can hold its own with any other sensational museum building in the world.

A fun introduction to art

Besides its unique appeal among local people, Amos Rex attracts large numbers of very young fans. After all, not even Norway’s “twisting” Kistefos Museum or China’s “floating” Liyang has a playground on its roof. And creative games often help to nurture an interest in art. Especially when presented together in such an innovative way.

Felix Muhrhofer is an interior designer and artist working on projects around the world, and for him, terrazzo is more than simply a material. The stones he uses shape his work and turn each piece into a one-of-a-kind article. They also leave a trace of a memory in the finished items that is retrievable with merely a glance ... 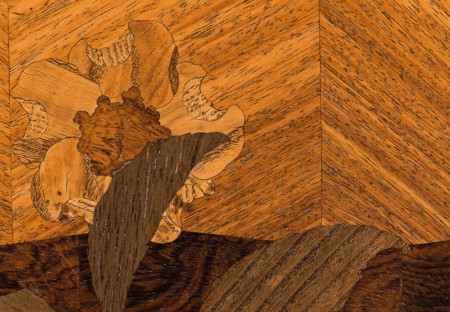 Summer ist the perfect time to entertain friends. The auction house im Kinsky offers some wonderful objects in its after-sale to enhance your dining table or dining room. Tables, dishes or decoration – every piece has been made by well-known masters ...