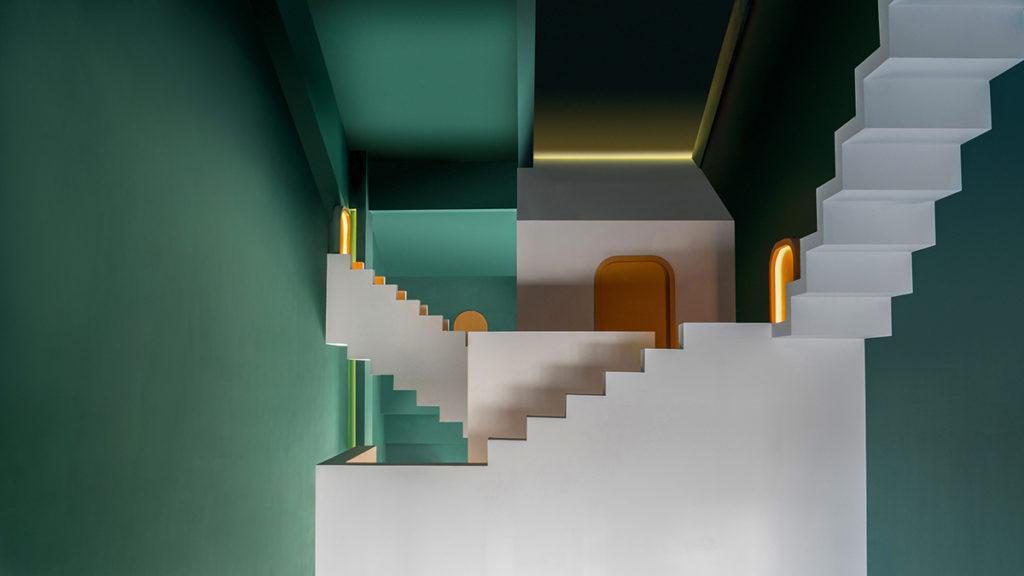 Stairs that stand upside down, perspectives that deceive, and doors that are not.

At the boutique hotel The Other Place in Guilin, Southeast China, Studio 10 made the impossible room. The inspiration for the hotel design was provided by the Dutch artist Maurits Cornelius Escher.

A room that seems natural at first glance, but gives up the second puzzle. Just as in Mauritius Cornelius Escher’s well-known Treppauf, Treppab and Relativität, the guests of the newly designed rooms of the boutique hotel The Other Place are confronted with perspective impossibilities and optical illusions. What is real, what a hallucination?

Dream / Inspired by the works of M.C. Escher, the architect meant to create a mysterious, infinite and impossible space with the seamless transformation amongst 2D and 3D as well as Optical Illusion elements. Pale pink and white color palette render the interior space serene and surreally fresh, far from the chaos of mundane daily life.

The perceived suspension of gravity

The idea for these illusionary installations came from Shi Zou, the architect and creative director of the Shenzhen-based Studio 10. She wanted “to create a mysterious, infinite space and a seamless transition between two- and three-dimensionality,” is the description of the design concept.

Maze / Inspired by the works of M.C. Escher, the architect meant to create a mysterious, infinite and impossible space with the seamless transformation amongst 2D and 3D as well as Optical Illusion elements. Forest Green and white color palette render the interior space serene and surreally fresh, far from the chaos of mundane daily life.

The suspension of gravity, which is perceived from every angle, leaves no doubt as to the inspirational presentation of Escher’s work, which fascinated Shi since his architectural studies. When she first entered the empty rooms with their bare concrete walls and the church-like ceiling height, the idea of ​​an Escherian design with surreal stylistic elements was immediately manifested.

The original mission of hotel owner Yi Feifei was to create something that was re-imagined, unique and out of our ordinary perception. The structural conditions of the rooms, such as installations and water connections, determined the room layout. The unique ceiling height of seven meters and the gable roof should be optimally integrated.

Shadow / Unnecessary decorative element has been eliminated, leaving the space with only the essentials; using recycled vintage elm,bamboo, rattan as well as other local natural materials, it aims at creating an introspective, rustic and ideological Utopia to call for reflection on the materialism, desire and obsession in our daily life.

Between real and fantastic space

For the two 70-square-meter Suites Maze and Dream, for which Studio 10 is responsible, it was important to find a good interplay between the practical requirements of a hotel suite and the effective room installations. Walls, floors and furniture are dotted in a monochrome color palette. While Maze creates a forest-green labyrinth with pink glades, Dream changes between cotton candy and marshmallows.

Both color palettes correspond to the concept of Utopia or ‘The Other Place’ and thus create spaces that are quite different from those in which we move in our daily lives.

Even the apparent lack of light connections, sockets and other profane technical devices – all hidden as built-in solutions or behind doors – contributes to the illusion of the fantastic space. The necessary playfulness in the strict minimalism of the design is provided by round elements such as bows and cylinders, which give a charmingly fictional character to the doors and furniture.

Escapism as a success factor

The Other Place – Guilin Litopia, the full name of the Guest House, is set amidst a postcard landscape, on the scenic shores of Li Jiang. Outside the windows of the rooms and suites, the imposing karst mountains of Guilin pile up. Although the hotel advertises in its recreational offer also with the surrounding landscape and the recreational nature, but primarily focuses on an aesthetic escapism that promises the desired rest. An alternative reality, which keeps each room in a different way for visitors, should put everyday life and thought-chaos into the distance as far as possible.

The hotel is familiar and manageable with a total of ten suites individually designed by five different architects. The materials used, such as stones, bamboo, rattan, banana leaves and lumber come from regional production.