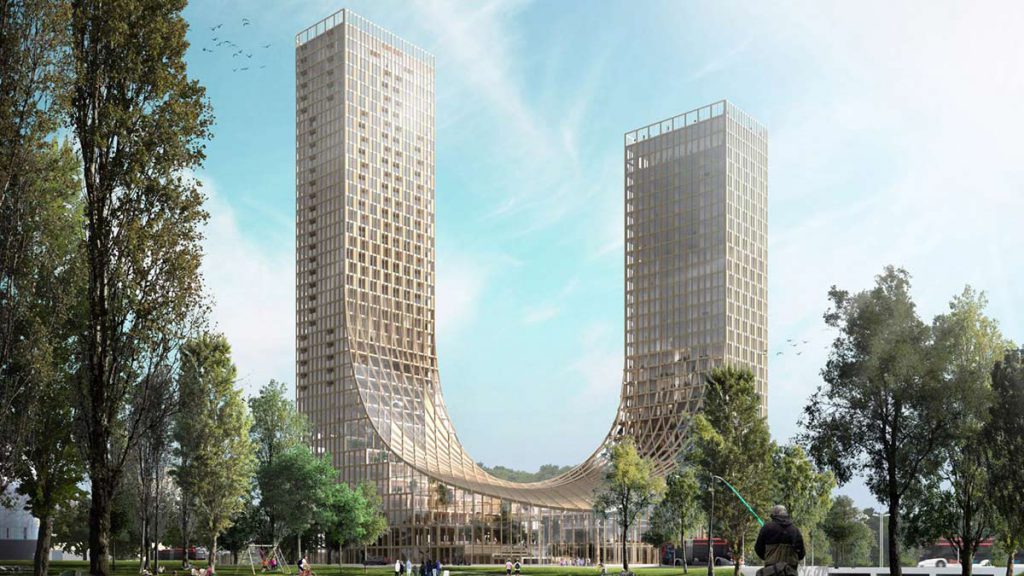 The Dutch city of Eindhoven will soon be home to the world’s highest “woodscraper”. The two towers – 100 and 130 metres high and known as the Dutch Mountains – are to set new standards in high-rise timber construction.

The country’s longing for mountains of its own is well documented in music and literature. In his novel, In The Dutch Mountains, Cees Nooteboom conjures up a Netherlands of high mountain passes and creeks. And the 1980s hit by The Nits also featured the fictional “Dutch Mountains”. However, the long years of yearning are finally at an end. The city of Eindhoven is to be gifted a new landmark with two peaks of unequal height and a green valley nestling between them.

A new geological formation may be out of the question, but Eindhoven can still offer its people a prime example of ecological architecture. The Dutch Mountains project aims to set new international standards in smart technology, green architecture and forward-looking urban planning. It is also the Netherlands’ entry in the race for the highest timber building in the world, which will be contested between Berlin, Sydney and Eindhoven over the next few years.

Representatives of the development consortium promise that the Dutch Mountains “will be a symbol of healthy and sustainable urbanization”. They also refer to the building materials, many of which will be bio-based. Above all, solid wood will be used in the construction: “The timber will fix a large quantity of CO₂ for a long time.”

The Dutch Mountains will be a symbol of healthy and sustainable urbanization.

The project also comes with the clean air that you would expect in the mountains. The climate regulation in the building is based as far as possible on natural principles. This means minimizing installations and the energy they consume. A natural irrigation system collects the rainwater on the roof and transports it down to the thriving plants in the “valley”.

A hybrid of timber and concrete

The 38-storey building has a timber hybrid design. Cross-laminated timber from sustainable forestry is used for much of the building work. Most of the elements are pre-fabricated and only need to be assembled on location. Elevator cores and other elements that are subject to high loads are built of steel and concrete.

The Dutch Mountains were designed by Studio Marco Vermeulen. Central to the design is the valley-like timber construction that joins the two tower façades and covers the conservatory and lounge.

The building has a sculptural main shape that is recognizable from a great distance and functions as a beacon.

Landmark of a new district

The project is part of the urban development space Eindhoven Internationale Knoop XL, which is currently taking shape on the area around the central station. Apart from offices, between 5,000 and 6,000 new apartments are also to be built here, near the banks of the Dommel, a tributary of the Meuse.

With its striking exterior, the multifunctional building complex is set to become the calling card for the new district. It consists of two rectangular towers, one 100 metres (328 ft), the other 130 metres (427 ft) high. The focal point of the complex will be the publicly accessible conservatory in the lower storeys.

Up the scenic mountain path

The apartments, offices, recreational facilities and the hotel on the top floors can all be reached from here. Complete with greenery and seating areas, the wooden staircase gives enticing views of the nearby Dommelpark and bears the very telling name Bergpad, meaning “mountain path” – a clear indication that the architects want to treat visitors to a glorious climb as a scenic alternative to the lift.

At the summit of the Dutch Mountains, visitors will find – just like in the mountains – a place to catch their breath. Unlike a mountain lodge, however, the rooftop bar and 360-degree view over Eindhoven will have an undeniably urban feel.