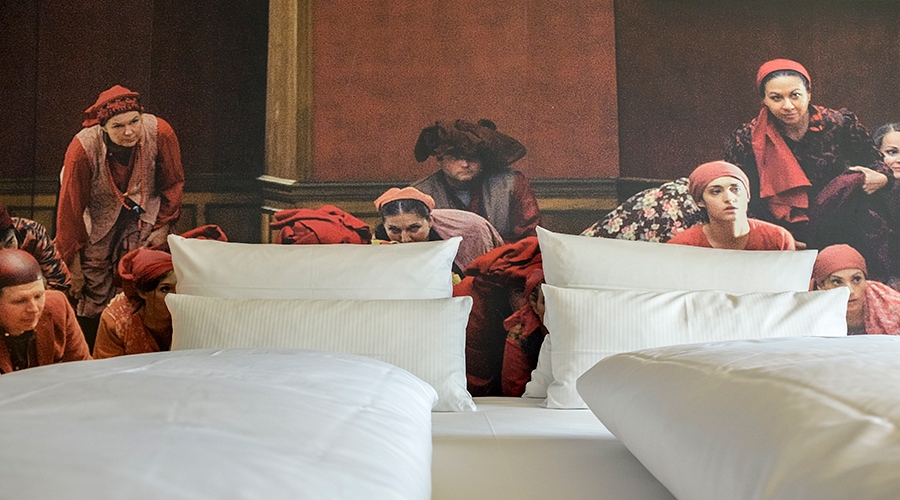 Charming boutique hotels in Salzburg’s old town are worth a visit at any time of year. But during the Salzburg Festival, the Hotel Goldgasse sets the scene for an even more profound experience.

The production of Jedermann was staged in the famous Cathedral Square in Salzburg for the first time in 1920. The play about the death of a rich man was directed by Max Reinhardt who, along with the play’s author Hugo von Hofmannsthal, was a co-founder of the Salzburg Festival. The character of Jedermann was played by the most famous actor of the time in the German-speaking world, Alexander Moissi, while Jedermann’s lover Buhlschaft was played by Johanna Terwin, Moissi’s wife in real life.

Over the last 100 years, there have only been a handful of occasions when Jedermann has not been performed at the Salzburg Festival. From the very beginning, the event has included operatic productions and concerts, and this programme has expanded every year since. The main highlight is definitely still the traditional rendering of Jedermann, which was based on several medieval mystery plays. To see it enacted on the steps in front of the cathedral, or in the festival hall during bad weather, never fails to be an unforgettable experience.

Paying hommage to the arts

Much older than the Salzburg Festival is a stone building in a charming little alleyway called Goldgasse. It is 700 years old and now home to one of the city’s most stunning and individual hotels: the Goldgasse, a boutique hotel with just 16 rooms that have all been designed around the theme of the Salzburg Festival. They pay homage to this enormous production, this event that turns the entire city into a stage – a notion that even director Max Reinholdt wished to express from the outset.

The rooms in the Goldgasse are a stage in themselves for modern features and contemporary design objects. And just so you know – this small-but-perfect retreat doesn’t just provide cultural inspiration, it also offers exceptional cuisine.

To mark the centenary of the festival this year, there will also be a state exhibition that will see the museum transformed into a stage. For six months, the Neue Residenz will become a forum in which to discover the rich history of the Salzburg Festival and its performers, presenting art interventions, enactments of stories and film screenings.

The state exhibition is the launch event to celebrate the 100-year anniversary of the Salzburg Festival. We are optimistic that this display will offer both the citizens of Salzburg and guests from all over the world fascinating retrospectives and glimpses of the future,